Akron remains #1 in the TopDrawerSoccer.com Tournament 48 National Ranking this week, following their two victories and MAC Tournament crown. Maryland remains at #2 after winning the ACC Tournament. 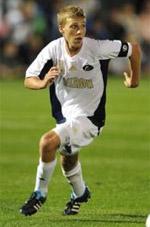 The ranking is an effort to project the men's college soccer postseason NCAA Tournament field of 48 each week, including the automatic qualifiers from every DI conference. This is our final projection of the season. The ranking update is posted after reviewing all results from the previous week. From here on, the ranking will reflect the results of the actual tournament.

Meanwhile, Akron’s Scott Caldwell is our TopDrawerSoccer.com Men’s College Soccer Player of the Week after assisting on all four of his team’s goals as the Zips won the MAC Tournament. Recipients of the honor, along with the entire Team of the Week, are chosen after examining Division One match summaries each week.

GK: Matt Underwood, Air Force – Made a vital save in overtime of the final and also in the semifinal win as the Falcons won the MPSF Tournament.

M: Scott Caldwell, Akron – Assisted all 4 goals as the Zips won the MAC Tournament via a  pair of 2-0 victories.