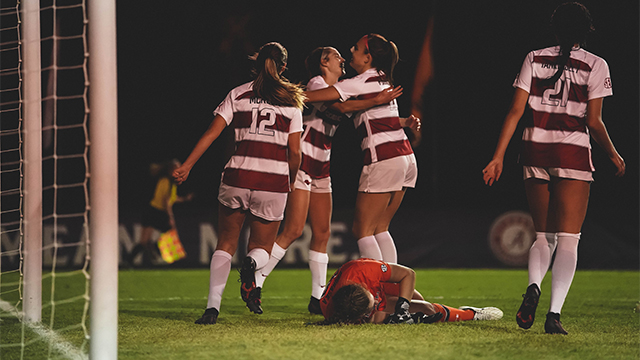 The SEC Tournament field is into the semifinals, as three of the top four seeds advanced on Tuesday at Orange Beach, Alabama.

Tuesday's lone upset saw Vanderbilt defeat in-state rivals Tennessee by a 4-2 score. A fast start for the Commodores was critical, as they scored twice in the game's first 18 minutes, first through Madison Elwell, and then through Leila Azari. Tennessee forward Mackenzie George pulled one back for the Volunteers before the half.

Vanderbilt retored their two-goal advantage in the 58th minute thanks to Kimya Raietparvar first collegiate goal, while Raegan Kelley extended the lead in the 72nd minute. George scored her second of the game for Tennessee, but that came with just five minutes to go, not enough time to complete the comeback.

Rolling into the quaterfinal with two straight wins, LSU gave a good account of themselves against Texas A&M in a 1-0 victory for the Aggies. The difference in this one was a 41st minute set piece, as Jimena Lopez's service beat everyone, including LSU goalkeeper Mollee Swift, for the game's lone goal. Texas A&M goalkeeper Kenna Caldwell made six saves to preserve the shutout.

We have a visual on goal from thirtysomething yards from Jimena Lopez! It was a beauty.

The Razorback offense roared to like in their SEC Tournament debut, blitzing the Auburn defense for four first-half goals, before clinging on to the lead and holding off a ferocious comeback to win it by a 4-3 score.

Arkansas scored four goals in the blink of an eye, as Kayla McKeon cracked open the scoring in the 8th minute, roudning out the goals just 14 minutes later. Taylor Malham and Reagan Swindall scored between McKeon's strikes, providing a four-goal cushion at the half.

But the Tigers pressed and pushed their way back. In the first six minutes of the second half, Mallory Mooney and Sydney Richards had quickly tallied to cut the deficit in half. Arkansas clamped down until the 87th minute, as Anna Haddock scored to setup a frenetic finish, but the Razorbacks held on.

The arc was similar in the final game on Tuesday. South Carolina jumped out to 3-0 lead in the game's first 48 minutes. Lauren Chang, Sutton Jones and Catherine Barry provided the offense. But Missouri also made a valiant push. Belli Alessi scored 14 seconds after Barry's goal, giving Mizzou a foothold. Julissa Cisneros made it a one-goal game in the 60th minute, but the Gamecock defense helped punch their ticket to the semifinals.