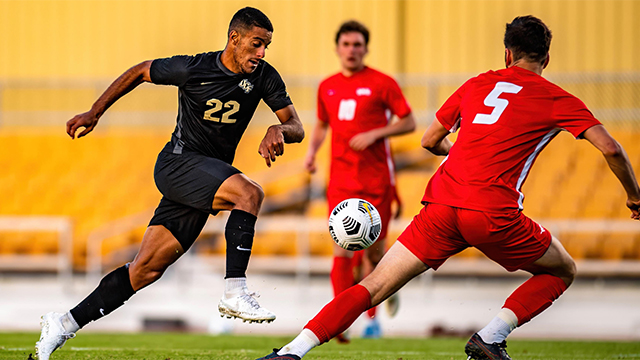 by Soccer Institute at Montverde Academy

On April 19, the 2020 NCAA Division I Men’s Soccer Championship bracket was finally announced after a tumultuous season that resulted in the tournament being postponed to the spring of 2021. Represented in extraordinary fashion, The Soccer Institute at Montverde Academy (SIMA) witnessed 28 alumni on rosters for teams that made the cut. Eight programs featuring former Eagles enter the tournament as conference champions with SIMA Director Mike Potempa’s alma mater, Clemson University chosen as the No. 1 seed overall.

The Clemson Tigers boast three remaining SIMA alumni on their roster after 2019 ACC Freshman of the Year and MLS Generation Adidas signing Philip Mayaka was drafted by the Colorado Rapids in January. The Tigers defeated the University of Pittsburgh over the weekend in the ACC Championship match to automatically qualify for their 33rd NCAA Tournament and, in doing so, extended their home unbeaten streak to 25 matches. Senior defender and first round MLS draft pick Justin Malou, is a bona fide starter for this team, while first-year freshman Hamady Diop and Ousmane Sylla have consistently been in the starting lineup in only their first season.

The University of Pittsburgh started the 2020 season with five MVA alumni prior to the 2021 MLS Superdraft, where goal scoring sensation Edward Kizza was a first round MLS draft pick signed by the New England Revolution, and is no longer in college. Junior midfield player and All ACC selection, Jackson Walti, continues to be a key fixture in the lineup starting in all but three of PITT’s matches since he arrived in 2018. The American playmaker also earned a spot on the 2019 All-ACC Academic Team, truly carrying on the student-first mindset instilled in him during his years at Montverde Academy. Junior midfielder Rodrigo Almeida continues to recover from injury, while first-year student athletes Soshun Shogaki and Vinicius Belon played limited minutes throughout the season.

The University of Central Florida (UCF) recorded an 8-3-1 overall record this year and will face James Madison University on May 2 at 5:00 p.m. UCF freshman striker Lucca Dourado has made an immediate impact this season and enters the NCAA Tournament with three goals in his last four games, including the game winner against Tulsa in the conference final. Brazilian defender Anderson Rosa has played nearly every minute of every match so far this season, earning six clean sheets with two assists and a goal. Meanwhile, redshirt sophomore goalkeeper Matt Douglass played an intricate role mid-season between the sticks and remains ready to deputize senior starter Yannik Oettl should he be needed.

Jacksonville University went 7-4-1 in the regular season and opens the tournament with a first round matchup against American University on April 29 at 6:00 p.m. The winner will face top-ranked Clemson University on May 2. Canadian midfielder Olivier Correa has had an outstanding freshman year racking up five goals and an assist across 12 matches this spring. Defensive players Gabriel Simoneu and Richard Lapointe round out the MVA graduates at Jacksonville.

Marshall University earned a 9-2-2 record this spring, good for the No. 9 seed in the NCAA Tournament. Sophomore midfielder Joao Pedro Souza logged 663 minutes across 13 games in 2021, scoring a winning goal against Florida Atlantic and contributing to eight impressive clean sheets. Sophomore right back Adam Kiernan earned an assist in the short 38 minutes he played this year, while Gabe Sitler is a redshirt freshman goalkeeper. Marshall will open against Fordham on May 2 at 1:00 p.m.

Sophomore midfielder Diogenes Kinyua and freshman defender Junior Welnilton for Virginia Tech (6-6-3) will play Oregon State on May 2 at 4:00 p.m. Kinyua has played 1182 minutes across 15 games since transferring from Appalachian State, while Silva has contributed to four clean sheet victories and has started every match thus far.

Freshman attacking sensation Peter Mangione and Penn State University (8-1-2) will face off against Massachusetts on May 2 at 1:00 p.m. Mangione wasted no time making a name for himself, earning a goal and assist that would be the difference in a 3-2 win over the University of Maryland in his first collegiate game. He has since scored five goals and assisted three in nine overall appearances, good for second on the team in both categories.

Freshman defender Emmanuel Hagan and Southern Conference Champions UNC Greensboro (9-2-2) face Denver in the First Round on April 29 at 6:00 p.m. Hagan has logged 802 minutes this spring, earning six clean sheets in 10 matches and has started every match as a freshman for the Spartans.

Sophomore striker Kameron Lacey and UNC Charlotte (6-3-1) open against the University of North Carolina on May 2 at 5:00 p.m. Lacey has scored three goals and earned two assists across his 18 starts with the 49ers.

Freshman Jahlane Forbes and No. 5 seed Wake Forest (11-2-2) will play Coastal Carolina on May 2 at 1:00 p.m. Forbes has contributed significantly in his first season with a goal and two assists over 662 minutes throughout the regular season with the Demon Deacons.

Senior goalkeeper and Honduras Olympic Team member, Enrique Facusse and the University of Kentucky (11-4-2) will face New Hampshire at noon on May 2. Facusse has been crucial between the sticks for the Wildcats over his three seasons as a starter, earning 29 wins and only allowing eight losses.

Freshman midfielder Pablo Diaz and Missouri State (11-1-0) will face the University of Maryland on May 2 at 1:00 p.m. Diaz won MVP at the 2019 Montverde Academy Soccer Tournament and will be chomping at the bit to get on the field after logging just 18 minutes on March 30 against Evansville.

Sophomore midfielder Xavier Laneuville and St. Francis Brooklyn start off against Milwaukee on April 29, with the winner facing No. 3 seed Indiana.

“This is a quite a historic moment for the SIMA program and a true testament to everything we value,” said Mike Potempa, SIMA Director. “We firmly believe that focusing on education and sport to provide opportunity is the most powerful formula for long term success in life. Having 28 alumni represented across 14 different NCAA Division I Programs in the national tournament is extremely special to us, and it will continue to set the standard for our current SIMA student-athletes who are working hard here on campus to achieve these same milestones,” Potempa added. “We wish our kids the very best as they prepare for the NCAA Tournament and look forward to watching them compete and flourish on the biggest stage of college soccer.”