Jaime Ibarra stared down CSU Bakersfield’s Ernesto Hinojosa as the bright lights of Westcott Field collapsed on the two of them. The game of 22 players suddenly ended up with a showdown between two.

Ibarra, the junior goalkeeper from SMU, was facing his second penalty kick attempt in three games.

The FC Dallas Academy product was in a similar situation a week earlier when he saved a kick from the spot in the 81st minute against Oakland to keep the score at 0-0. Leobardo Vazquez scored the game-winner for SMU in overtime. Ibarra was awarded MVP of the tournament.

This time, the situation was amplified. 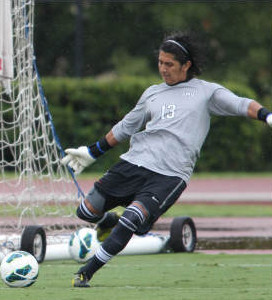 With just over two minutes left in the second overtime against the Roadrunners, the outcome of the game, in essence, came down to this kick.

“I felt pretty confident,” Ibarra told TopDrawerSoccer.com citing the earlier penalty kick save. “It changed my mentality. I thought, ‘I got this.’ Fortunately, I was able to do that.”

Ibarra’s diving save to block the penalty kick secured a point for the Mustangs, and extended its unbeaten run, which is now up to seven games after starting the season 0-2-1.

“We are a really young team,” Ibarra said. “We have a lot of freshmen and sophomores. We knew they were going to be tough games against South Florida and New Mexico.

“We just kind of went with the mentality that things are going to pick up. It was a matter of time before things starting coming together.”

The Mustangs are rolling now, and claimed an important victory over UAB on Saturday to open up Conference USA play on the road. Ibarra made 10 saves in the 1-0 victory.

“They had some really big guys,” the netminder said. “They put a lot of services into the box too. It was a really physical game. I don’t think I have been beat up that much in a game before.”

The ferocity of Conference USA hardly gives him a break though with Tulsa heading to Dallas on Wednesday. The Hurricane attack is seventh in the nation in goals per game (2.60).

“Tulsa is always a good game,” he said. “They are our biggest rivals in the conference. They are a team that likes to play [with the ball on the ground.]”

The Oklahoma program will need something special to get around Ibarra. Through the first part of the season, he ranks forth in the nation in saves with 61 in 10 games. He is the only keeper in the top five in that statistic with a winning record.

“Build upon what I did last season,” Ibarra said about his goal for this year. “I had some ups and downs [last year], so I am trying to be consistent with my approach and do what the team needs to win.”

Given his history with the local MLS club’s youth academy, it is no surprise that Ibarra trained with the FC Dallas first team this summer to stay sharp.

“I hope so,” he replied when asked about an MLS future. “I have one more season after this . . . I don’t want to think too far ahead.”