Texas State won the Southland Conference’s automatic NCAA tournament bid last season, but along with UT San Antonio, the Bobcats are departing the league to join the WAC. Oral Roberts will be the lone replacement for this season. Houston Baptist will be joining, but not until the 2013 season.

Stephen F. Austin returns as the regular season champion, and head coach Tony Amato, whose team went undefeated and posted a 36-1 goal difference in league play until an upset loss in the conference tournament final, continues the work of building a successful program.

Amato is focusing on his own team rather than worrying about what didn’t happen last year or what is happening with the conference.

“We’ll play whoever they tell us to,” Amato said. “Our goal is to be the best in the conference and then about getting into the tournament. We want to be good enough to make it in as an at-large team.”

Amato credited his players with buying into the program over his first two years in Nacogdoches.

“We focus on recruiting kids in state and we get some good players through that,” he said. “The kids know the school and that we have a nice campus. They are buying into what we’re doing and that will help push us forward in terms of building on these successes.” 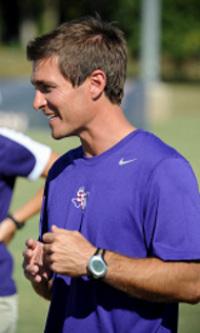 South African international Kylie Louw is currently at the London Olympics representing her country, but will be a key player in midfield for the Ladyjacks again this season. She is conference player of the year for two years running.

“She’s the catalyst of our team and just a great overall personality,” Amato said. “She’s our focal point in attack.”

Canadian Breanne Vernon leads the back line, while conference freshman of the year Chelsea Raymond is back up front after scoring 17 goals last season. Laura Sadler is another key component of the Ladyjacks’ attack.

New head coach Orlando Cervantes will be glad to see 8 starters returning for the Cardinals. Some key players back in the fold include Grace Bowman, Lorna Maudsley, Kimmy Albeno, Kristin Bos and Jennifer Torry.

Blake Hornbuckle’s Lions lose defenders Kyle Macintosh and Jennifer Marzi from the back line, but welcome Shanyce Shaw back to the defense along with goalkeeper Cassie Northrup.

Starting with the second place team, 7 of 10 teams in the league won five games or fewer overall. That’s a mark that leaves plenty of room for improvement.

Getting back to the positive, the Golden Lions led start-to-finish last season, but were routed by Oklahoma State 9-1 in an NCAA Tournament 1st round match. Now Rohan Naraine, former head coach at St. Andrews and Coastal Carolina, takes over at the helm of the program, replacing Roberto Mazza.

The remaining teams in the conference will be looking to improve individually and collectively on the worst overall record of all DI conferences.