Stanford at No. 1, Harrison Player of Week A 6-1 victory over Santa Clara should have erased any doubts held about Paul Ratcliffe’s Stanford Cardinal and their ability to repeat this season as national champions. Accordingly, the Pac-12 giants remain at #1 in the TopDrawerSoccer.com Tournament 64 National Ranking, updated today. 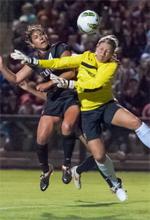 The ranking is an effort to project the postseason NCAA Tournament field of 64 each week, including the automatic qualifiers from every DI conference. The ranking update is posted after reviewing all results from the previous week.

While Stanford at #1 and Duke at #2 remain in their positions, perennial powers Notre Dame and North Carolina take a bit of a drop after respective opening night losses on Friday. Portland, 1-0 victors over the Tar Heels despite being predicted for a mid-table finish this season by West Coast Conference coaches, are back in the projected field at the expense of Ohio State, which dropped a pair of weekend matches, albeit due in part to the absence of some key FIFA U20 World Cup participants.

Meanwhile, Tennessee midfielder Amy Harrison is our TopDrawerSoccer.com Women’s College Player of the Week after she helped lead the Volunteers to a pair of impressive wins on the opening weekend of the season.

The honor, along with the 11-player Team of the Week, is awarded each week after a review of match reports through DI Women’s Soccer. Harrison scored four goals on the weekend as Tennessee defeated Samford 4-0 and Western Kentucky 4 -1 to open the Brian Pensky era for the program.

Other players named to the Team of the Week include Portland goalkeeper Erin Dees, who was instrumental in the Pilots’ 1-0 home shutout over North Carolina, California’s Grace Leer who scored a hat trick in the Golden Bears’ win over San Jose State, Rutgers’ Jonelle Filigno who scored three times in two games including a golden goal Sunday vs. Ohio State, and Kristin Cummins, scorer of two golazos including the golden goal in Texas’ 3-2 win over Dayton on Friday.

D: Kelsey Mitchell, Virginia Tech – Played every minute of a pair of shutout wins for the Hokies.

D: Kim DeCesare, Duke – Recorded 3 goals and 2 assists in a pair of wins.

M: Emily Goldstein, Iowa State Recorded 2 goals and an assist on the weekend, including a golden goal vs. Creighton.

M: Christine  Nairn, Penn State – Scored twice and had an assist in a pair of wins.