SAN JOSE, California - The North Carolina Tars Heels advanced to the NCAA Championship game for the 26th time in program history on Friday. UNC defeated Washington State 2-1 and improved to 24-1-1 on the season thanks to goals from Alessia Russo and Alexis Strickland.

Stanford joined North Carolina in the title game behind a hat-trick performance from Sophia Smith. This will be the fifth time Stanford has advanced to the title game - all appearances since 2009.

The final is on Sunday at 5:30 p.m. (PT) from Avaya Stadium in San Jose. ESPNU is broadcasting the event. 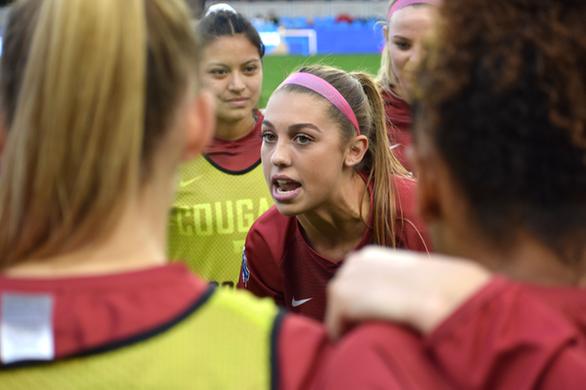 Anson Dorrance said it took a bit of luck to get past Washington State on Friday night. The winningest coach in college soccer history was not entirely pleased with his team’s performance on Friday night (and he was even more disappointed in the poor choice in footwear as his players slipped all over the slick grass thanks to recent rain in California), but he is glad to be heading to the final on Sunday.

“They made it very difficult for us,” Dorrance said about the Washington State Cougars. “They just were very competitive. It was just an incredibly challenging game. Soccer is just an interesting game. Honestly, if you look at the chances created, they created better chances than we did. We happened to finish the two that we created, but they created twice as many chances as we did. Yet here we are advancing.”

North Carolina can thank goalkeeper Claudia Dickey for helping to secure that spot in the championship bout. Russo scored the equalizer midway through the first half and helped effectively kill off the game in the second. Dickey was a standout in goal all game. She shut down Washington State’s chances on corner kicks and made a few good saves from the run of play.

Washington State snagged an early goal off a sublime finish from star striker Morgan Weaver. The play started with a long drop kick from goalkeeper Ella Dederick. Two flicks helped the ball onto the path of Weaver who took a touch past a North Carolina defender and then buried the shot with her right into the far corner.

“I kept pressing, I won the ball and I just looked up and saw the goalie out a little,” Weaver said. “So I just shot it and it went in.”

North Carolina answered in the 24th minute on a goal from Alessia Russo. The North Carolina forward did well to create a little space in the box. Taylor Otto supplied the perfect chip pass and Russo tipped it past Dederick and into the goal.

“It was a great ball over the top from Taylor Otto,” Russo said. “She played me one just before like it. It was the exact same situation pretty much, just a bit further out to the left. I just saw it as an opportunity. As a forward, anytime you get in the box that’s what you have to try to do is finish the ball. Credit to Taylor. It was on a plate. It was fortunate that I got behind and could put it away.”

North Carolina grabbed the lead with seven minutes left in the first half on a great header from Alexis Strickland. Ru Mucherera provided the perfect assist and Strickland timed her run well to smash a header home at the far post.

With the advantage in the second half, North Carolina’s confidence grew and Washington State was forced to chase the game. North Carolina had a pair of chances early but Dederick did well to make a clean save on both of them and keep the deficit to only one goal.

Washington State gained some footing in the second half after 20 minutes and the flow of the game turned in their favor. Averie Collins had the first chance on a shot from the center of the 18-yard box, but her effort hit went wide of the goal.

Dickey came up big again in the 72nd minute when she saved a rocket off the foot of Mykiaa Minniss.

It was not a one-woman show for the North Carolina defense though. Maycee Bell made a game-saving tackle in the 75th minute when she slid to knock the ball off of Weaver’s foot after the WSU forward skipped past Lotte Wubben-Moy. Weaver was in on goal and Bell did well to knock the ball off her foot.

Russo nearly scored her second of the game on a shot from a tough angle with 13 minutes left. The shot looked like a cross when it came off her foot but took a significant bend and curved on goal late. Dederick made arguably the save of the game to tip the shot over the bar.

Weaver did not go quietly into the night. Her best chance in the second half came with 12 minutes left. She broke free of the defense on the left side. The striker hit a shot toward the far post but it went wide of the frame and was too close to the goal for Bennett to get a touch onto it.

North Carolina was very effective in killing off the final minutes of the game. Brianna Pinto and Russo took the ball into the corner and ran the seconds off the clock.

North Carolina advances to the College Cup Championship for the second consecutive season. The Tar Heels came up short against Florida State last season in the big game. 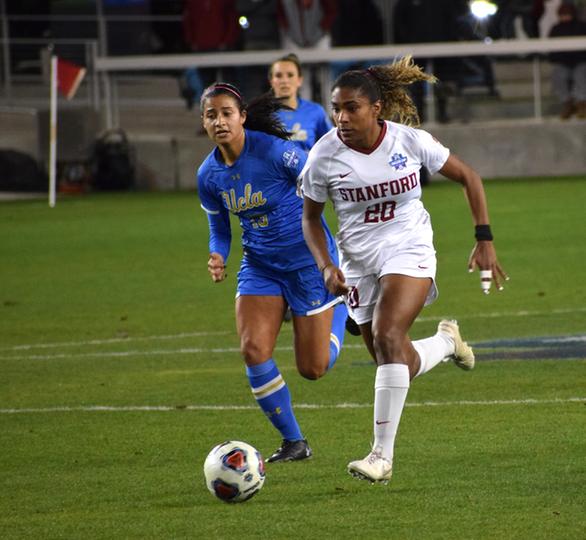 UCLA took the first big swing on Friday night. Senior midfielder Chloe Castaneda drilled a shot from the top of the box that left her foot and hit the back of the net in an instant. The Bruins stood a bit taller after landing the first blow.

“I was ecstatic, and I thought we really set the tone for the rest of the game,” Castaneda said. “It was rough after that.”

The Cardinal answered back. And then kept punching.

“I thought it was a great team performance,” Stanford head coach Paul Ratcliffe said. “We responded with great character.”

“Obviously, we wished we had a better effort overall, just for the game of soccer in general,” UCLA head coach Amanda Cromwell said. “You always want to offer something more in the liking of how we’ve been playing, and tonight was an off-game for us. It didn’t reflect our season. It’s a hard way to end it.”

Sophia Smith scored her first of three goals of the night two minutes after Castaneda’s opener. Smith was a terror down the right wing throughout the game and found a ton of success taking on defenders with the ball at her feet.

Carly Malatskey scored the go-ahead goal in the 21st minute. Malatskey hit a well-placed shot off an assist from Madison Haley and Kiara Pickett.

“This whole time I was just hungry to score,” Malatskey said. “Once Madison [Haley] turned, I was just making that run hoping to create space for her. Once she played it in, I was like, ‘OK, I know I have to hit this first time.’ It was an incredible feeling to put my team up and get that energy up to keep going.”

Smith added another goal before half. Haley provided the assist and Smith drilled another low shot past the keeper and into the net.

The Bruins had a couple of chances to chip into the lead at the end of the first half. The best chance came from Mia Fishel. The freshman attacker was brought down in the 18-yard box on a clumsy challenge. Fishel took the penalty kick. Stanford goalkeeper Katie Meyer read the kicker and made a clean block on the penalty kick, Smith cleared the rebound out for a corner kick.

“Momentum definitely changed on that PK,” Ratcliffe said. “It could’ve changed for their purposes because they were coming back in the game there. That would’ve made it 3-2, so that was a massive play that really changed the momentum. Katie Meyer was obviously disappointed in the first goal and how she conceded that, so she had something to prove. She’s a great competitor and made a massive save on that PK.”

“We had other opportunities to close that gap,” Kaiya McCullough said about the penalty kick and if it shifted the momentum of the game. “It’s not just on that penalty kick.”

The two-goal advantage for the Cardinal was more than enough in the second half, but Smith added to the tally just to be safe.

Smith took all of the drama out of the second half when she scored her third goal of the game in the 52nd minute. It was a carbon-copy of her other tallies from the evening as she continued to find success down the right wing.

Paul Ratcliffe afforded some of his star players a moment in the spotlight as he began subbing off the standouts of the evening midway through the latter half. Catarina Macario, Madison Haley, and Smith left to a rousing ovation from the home crowd.

UCLA pushed for a consultation score late, but Meyer turned them away. The Stanford goalkeeper finished with four saves. UCLA goalkeeper Tegan Micah recorded 11 saves in the game.