Wins over Washington State and Washington, along with an upset loss by previous #1 Florida State at Boston College, have collaborate to put Stanford back on top of the TopDrawerSoccer.com Tournament 64 Women's National College SoccerRanking, updated today 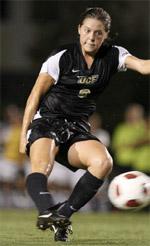 The ranking is an effort to project the postseason women's college soccer NCAA Tournament field of 64 each week, including the automatic qualifiers from every DI conference. The ranking update is posted each Monday after reviewing all results from the previous week.

Stanford raised its record to 14-1-1 on the season, giving them the nod of #2 UCLA (14-0-2) and the Seminoles (15-1-0). New teams in the ranking this week include Colorado College, Kentucky and Wisconsin.

Meanwhile Tishia Jewell of UCF is our TopDrawerSoccer.com Women’s College Soccer Player of the Week after she scored 2 goals and added 4 assists in a pair of wins for the Golden Knights. The honor, along with the 11-player Team of the Week, is awarded each week after a review of match reports through DI women’s college soccer.

D: Ashley Nicol, UCF – Scored a goal and added 3 assists while helping her team post a pair of shutout victories.

M: Ally Miller,  Marquette – Described by her coach as the heart and soul of the team, she went 90 minutes as the Golden Eagles won 4-0 on senior night.

M: Megan Miller, Oregon State – Scored twice and added an assist as the Beavers earned a win and a draw.

F: Rachel Nuzzolese, Wake Forest –Scored 2 goals and added  an assist to help the Deacs to a pair of ACC wins.