It was a matchup of two of college soccer’s best teams, and there was very little that separated North Carolina and UCLA on Friday night. In the end, it required a special talent to make the difference, as reigning Hermann Trophy winner Crystal Dunn delivered the game winner for the Tar Heels in a 1-0 defeat of the Bruins. 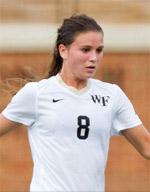 The win, combined with a 4-2 victory on Sunday against a determined West Virginia side, pushed UNC’s record to a perfect 6-0, maintaining a clear hold on its No. 1 ranking.

Keeping pace with the Tar Heels is conference rivals Virginia, which moves into the second spot after a 6-0 pasting of Rutgers on Friday, following up with a 3-0 defeat of Seton Hall. Virginia midfielder Morgan Brian helped pave the way with three goals and two assists on the weekend.

It was also a great three-day stretch for Stanford, which moves into the No. 3 slot. Outscoring two opponents 7-0 in a Friday-Sunday slate of games, the Cardinal saw off Loyola Marymount and Maryland. Transfer Taylor Uhl accounted for three of the team’s goals in the wins.

Perhaps the game of the weekend took place out west as well. No. 11 Wake Forest made the trip to Pacific Northwest for a pair of games. After edging Washington 1-0, Sunday’s finale seemed like it would translate into disappointment, as the Demon Deacons found themselves down 2-0 at the half. The ACC side found its way back into the game with two quick goals five minutes into the second stanza to tie, setting the table for Ally Berry’s 76th minute, and maintaining Wake’s undefeated record.

Jumping into the rankings this week are No. 22 South Carolina, No. 23 Texas Tech and No. 25 Arkansas.

Take a look at the complete rankings.