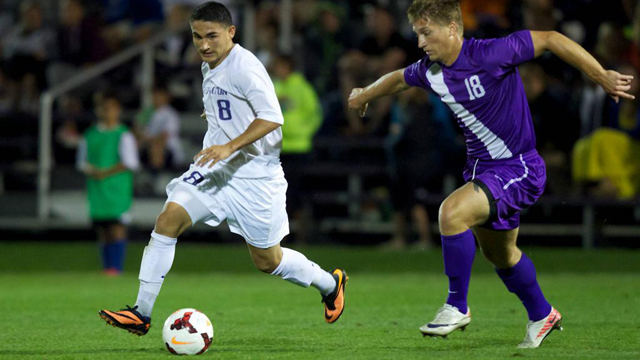 The adjustment period for a freshman to college soccer is different for everyone, but late in the season it seems like everyone starts to find their role and click. Recently, Gatorade Player of the Year Cristian Roldan has been fitting in nicely with the Huskies. With three goals and two assists over the course of the past week, the midfielder has been a key part of the Huskies’ attack.

For his contributions, Roldan has been named the TopDrawerSoccer.com Player of the Week.

GK Kyle Renfro, Virginia Tech: The senior goalkeeper stopped a penalty kick in overtime to help Virginia Tech capture a 1-1 draw against Virginia. The stopped spot kick was the second of the season for Renfro. He finished the game with 10 saves including four in overtime.

D Mike Robinson, Penn State: Played all 101 minutes for the Nittany Lions in a 2-1 double overtime victory over Michigan State on Sunday. Robinson also had the game-winning assist on Jordan Tyler’s goal.

D Craig Nitti, Loyola Marymount: The junior defender scored the game-winner against San Francisco on Sunday for the Lions. Nitti also helped the defense shut out the Dons and only allow two shots on goal.

D Drew Murphy, UC Santa Barbara: The part-time center midfielder and part-time left back had a goal and an assist in UCSB’s 3-2 double overtime victory over UC Davis over the weekend.

M Parker Maher, Missouri State: Played every minute for the Bears in a 0-0 draw against Oral Roberts and a 1-0 double overtime win over Evansville. Maher helped hold ORU to zero shots on goal during the scoreless affair.

M Cristian Roldan, Washington: The talented freshman had two goals and two assists in a 5-3 win over San Diego State. He also nabbed the game-winner last week against Oregon State for the Huskies.

M Mamadou Kansaye, UMBC: Kansaye had a role in both of UMBC’s wins last week including the game-winning assist late against Vermont. He also scored his second goal of the season against New Hampshire.

M Tyler Arnone, Michigan: Arnone was instrumental in Michigan’s 1-0 win over Creighton and followed up that performance with a game-winner against Wisconsin over the weekend.

M Luca Gimenez, Wake Forest: The senior had two goals and an assist in Wake Forest’s 4-3 win over Maryland over the weekend. The five-point game helped the Deacs remain unbeaten in ACC play as well as record the 400th victory in program history.

F Bobby Edet, Furman: The FC Dallas Academy product scored a brilliant game-winner against Elon for his seventh goal of the season and fourth game-winner. He also had an assist against Clemson in a 2-1 win for Furman.