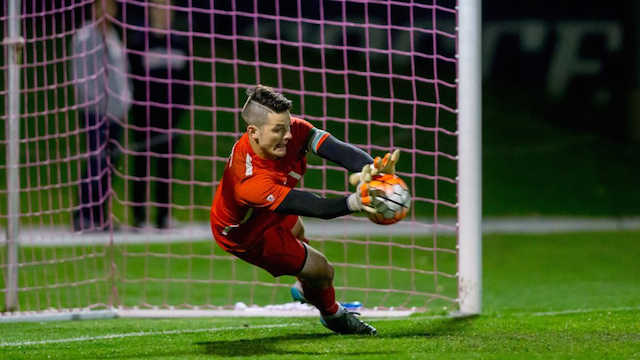 This past week of college soccer was full of great individual performances. There were players stepping with game-winning tallies in overtime, midfielders supplying all of the assists in come-from-behind victories, and defenders leaping to the occasion to clear danger in close encounters. However, it is difficult to top the performances from one goalkeeper, who willed his team to a pair of draws over the week.

GK Ryan Herman, Washington - The Huskies went on the road and picked up a pair of draws thanks to their goalkeeper. Herman made 11 saves in a scoreless draw against Stanford. A number of those saves were high quality stops to keep the Cardinal off the scoreboard. He followed that up with five saves on Sunday as Washington recorded a scoreless draw against California. He came up with two result saving blocks in that contest.

D Iman Mafi, Clemson - Mafi scored the game-winning goal Charlotte on a penalty kick on Tuesday. He added another goal on Friday as Clemson took down Louisville in ACC action. The Tigers are 3-1-1 in conference play thanks to the efforts of Mafi and the rest of the defense.

D Cole Seiler, Georgetown - Seiler scored his first goal of the season on Saturday in Georgetown’s 2-0 win over Butler. Seiler put in the goal early in the second half to double the Hoyas’ lead. He was a key part of the defense that shut out Butler on the day.

D Brendan Hines-Ike, South Florida - Hines-Ike scored on Saturday in South Florida’s 3-0 win over Cincinnati. It was Hines-Ike’s second goal of the season. He also did an excellent job of shutting down Cincinnati’s attack, which only managed three shots on goal in the game.

D Brandon Millington, UNC Asheville - Millington was one of the key players for UNC Asheville in a 3-2 upset win over Coastal Carolina last week. The defender provided the assist on the game-winning goal for the Bulldogs.

M Mauro Cichero, SMU - Cichero scored his eighth goal of the season on Saturday in a 1-0 win over Connecticut. The SMU midfielder put in a free kick from Jared Rice for the lone goal of the game.

M Liam Doyle, Ohio State - Doyle scored the game-winning goal in overtime against Indiana on Saturday. The midfielder converted the penalty kick to give Ohio State the win. He had two assists last week against Bowling Green in another win for Ohio State.

F Simon Enstrom, Boston College - Enstrom scored both of Boston College’s goals in a 2-1 win over Virginia last week. The freshman from Sweden leads the team in goals with five already this season.

F Dominick Faletto, Houston Baptist - The freshman forward finished the weekend with two goals and an assist as he was the top point scorer for the Huskies in a banner weekend for the program. Faletto and his teammates knocked off Seattle on Friday. Faletto notched the final goal of the game in that one. The Huskies followed that up with a 2-1 win over Utah Valley on Sunday. He scored the equalizer in that one.

F Jason Wright, Rutgers - Wright scored a hat trick against Yale as Rutgers claimed a 5-2 win in the non-conference clash. He followed that up with a game-winner in the 93rd minute against Michigan.

F Nick DePuy, UC Santa Barbara - DePuy did it again. The junior forward for the Gauchos recorded the game-winning goal in both games over the weekend for the second straight week. He scored the first goal in a 2-0 win over UC Riverside on Thursday. It was his 11th goal of the season. He claimed his 12th goal of the campaign on Saturday in a 2-1 overtime win over Cal State Fullerton. DePuy scored in the second overtime period to push the Gauchos conference record to 4-0.