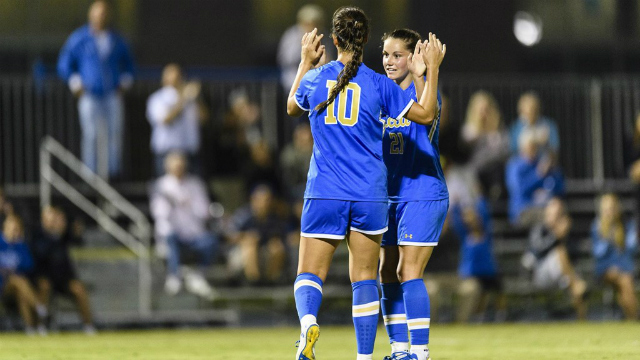 Much was made of the decision for Mallory Pugh to leave UCLA without playing an official game earlier this weekend.

But if this past opening flurry of action is anything to go by, Jessie Fleming will make up for Pugh’s departure – and then some.

The full Canadian international got off to a flying start to the 2017 season, scoring a tremendous effort in Friday’s win against San Diego State, while also assisting on another goal. In Sunday’s 5-1 victory, she scored the opener and added two more assists, securing the first Player of the Week nod in the new season.

Fleming’s highlights the initial TopDrawerSoccer.com Women’s Team of the Week.

GK Rylee Foster, West Virginia – The Mountaineers held on to a 1-0 win in sweltering conditions on Friday to defeat Georgetown. Foster was sharp, making seven saves while looking imposing and confident in her penalty area.

D Jimena Lopez, Texas A&M – Few freshmen enjoyed the quality start to the season like Lopez. After scoring the winning goal in overtime of a 1-0 win over Pepperdine, she scored a penalty kick in Sunday’s 2-0 victory over San Diego. Lopez also played every minute at the back of two shutouts.

D Molly Ream, Saint Louis – The senior defender helped the Billikens to a great start to the season, playing all but 13 minutes across two 3-0 victories against Miami (OH) and Vanderbilt.

D Haley Thompson, SMU – Now with two positive results to start the season, Thompson played 207 minutes and helped keep two shutouts, a 1-0 victory against Arkansas and a 0-0 draw with Oklahoma.

M Tziarra King, NC State – Picking up where they left off in 2017, the Wolfpack swept past Oregon and Portland on a two-game swing to the Pacific Northwest. The All-ACC Third Teamer as a freshman in 2016, King had two assists in the win over the Ducks and scored the game winner versus the Pilots.

M Sarah Stratigakis, Michigan – The Canadian international enjoyed a strong start to her college career, scoring a goal in each game as Michigan defeated Washington and Idaho State.

M Jessie Fleming, UCLA – It was a sizzling opening weekend for the player of the week, who will be integral for UCLA’s Pac-12 and national title hopes, highlighting a young but talented team.

F Catarina Macario, Stanford – Another highly-touted recruit flying out of the blocks, Macario was on the score sheet three times in her first two college games, both lopsided wins for the Cardinal.

F Abigail Kim, California – The Pac-12 lived up to its billing during the opening weekend, as Cal also picked up a pair of wins. They were close, 2-1 victories, as Kim score three times, including both goals in a 2-1 victory over UC Irvine. She scored and earned a penalty in a victory on Sunday against Santa Clara.

F Amanda Galbraith, UNLV – In her first two games for UNLV, the junior transfers made a huge impression. She scored twice and added two assists in wins against Drake and Wright State.