Delivering at this stage of the season can make or break a team’s postseason chances. 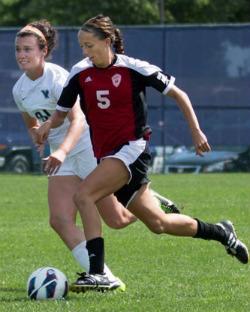 While several teams know that their NCAA future is safe, the same cannot be said about squads sitting on the bubble ahead of next week’s selection show. That makes a deep conference tournament run vital for those holding out hopes to keep playing into November.

The TopDrawerSoccer.com Player of the Week managed to help keep postseason hopes alive for one side over the weekend. With Memphis firmly on the bubble, freshman forward Valerie Sanderson delivered in a huge way. She scored two goals, including the overtime winner in the American Athletic Conference quarterfinal against Louisville on Sunday.

Sanderson also scored twice and had an assist in Friday’s 6-0 romp over Houston in the tournament opener. The Tigers face Rutgers in the AAC semifinals on Friday, which is another must-win encounter.

Here’s the full TopDrawerSoccer.com Team of the Week.

GK Emma Stevens, Nebraska: The reliable Stevens was once again solid in goal – making three saves in a 3-1 defeat of Indiana that secured the Big Ten regular season title. But she also scored a wind-assisted insurance goal off a long punt late in the second half.

D Hanna Gardner, North Carolina: A key cog in last season’s College Cup triumph, Gardner was once again in good form for the Tar Heels over the past week. She logged 180 minutes as UNC shutout a pair of high-powered attacks, blanking Duke in a 3-0 win on Thursday, and Boston College 1-0 on Sunday.

D Alexa Freguletti, Monmouth: The defender helped the Hawks clinch a spot in the MAAC tournament title game, playing 180 minutes in two shutout victories: 1-0 over Canisius on Friday, and a 3-0 win over Rider on Sunday.

D Abby Dahlkemper, UCLA: The center back remained as solid and steady as ever over the weekend, as the Bruins locked up the Pac-12 crown and a spot in the NCAA tournament. UCLA blanked Oregon State 3-0 on Friday, and Oregon 2-0 on Sunday.

MF Morgan Brian, Virginia: After Maryland took a shock 1-0 lead in the ACC quarterfinal on Sunday, Brian led the comeback for the Cavaliers. Her headed goal provided the equalizer, and then she set up the go-ahead tally just minutes later, adding a goal to finish the day with two goals and the assist.

MF Julia Besagno, Seattle: Playing her final weekend of regular season action, the senior helped hold down the midfield as Seattle picked up a pair of wins against Idaho. She also tallied in one of the wins, as the Redhawks locked up the WAC regular season title.

MF Nicole Sutterland, Washington State: The Cougars notched a pair of impressive wins at home over the weekend, topping ranked visitors California and Stanford. Sutterland played a significant role in both wins, scoring twice, including what turned out to be the gamer winner, in the 3-1 defeat of the Golden Bears. She also assisted on the decisive goal in a 1-0 win against the Cardinal.

F Tesa McKibben, Saint Francis (PA)(w): The senior likely couldn’t have put together a better pair of performances in her final two regular season home games. In a 4-2 win over Sacred Heart on Friday, she scored two goals and had an assist, following that up with a hat trick and an assist in a 4-1 win over Fairleigh Dickinson. The latter result also secured the Northeast Conference regular season crown.

F Valerie Sanderson, Memphis: In a 2-1 win over Louisville – a game where the Tigers were out-shot 26-9 – Sanderson provided the finishing touch on both goals in the win over the Cardinals, and also nabbed two more and a helped in Friday’s 6-0 defeat of Houston.

F Morgan Marlborough, Santa Clara: After some early-season struggles for both the Broncos and Marlborough, the west coast side is cruising and could make some noise in the NCAA tournament. After conceding twice in the game’s first 17 minutes against Pepperdine on Sunday, Marlborough inspired a nine-goal barrage with a hat trick and assist in a 9-2 win.