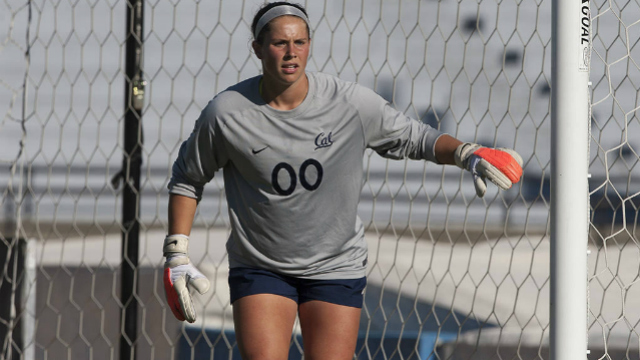 Conference races are becoming tighter and tighter as the women’s DI season progresses, placing added important with fewer games left on the schedule.

The Pac-12 race still might lean towards Stanford, though California’s Emily Boyd did her part last week to keep things open.

Boyd amassed an impressive 19 saves in a 1-1 draw against UCLA and a 1-0 win over USC on the road, as the Golden Bears remained tied for second in the Pac-12 with Utah.

Find out which national standouts join her on the latest Team of the Week.

GK Emily Boyd, California – If not for a rebound fired home late against UCLA, Boyd almost led the Golden Bears to a pair of 1-0 road wins. Instead, they still managed four points, as Boyd’s stops in overtime against the Bruins kept the scores level at 1-1. After making 11 saves against UCLA, she had eight in Sunday’s 1-0 road win against USC.

D Christina Gibbons, Duke – Now sitting atop the ACC, Duke continues to reshape and retool itself in the face of some injury difficulty. Part of that is the play of Gibbons, who is starting to make an impact with her ability to generate offense from the midfield. Gibbons scored from the penalty spot and added two assists as the Blue Devils picked up wins over NC State and Wake Forest.

D Emily Morrow, Tennessee – Morrow started both games as Tennessee picked up big SEC wins against LSU and Texas A&M. She contributed an assist in each game, as the Volunteers conceded just one goal in the win.

D Michelle Maemone, Pepperdine – Few programs enjoyed as prosperous of a week as Pepperdine did. The Waves are now atop the WCC standings after beating San Diego 2-0 on Thursday, and edging high-scoring BYU 1-0 on Saturday. Maemone played all 180 minutes at the back, anchoring the team to a pair of shutouts.

M Katy Mixon, North Florida – Mixon had a part in five of the Ospreys seven goals this weekend. In Sunday's 4-3 win over USC Upstate, she had a career-high five points (2g, 1a). Against NJIT, she came off the bench to score twice in Friday night's 3-1 win.

M Alexis Shaffer, Virginia – As the Cavaliers continue to regain momentum, Shaffer scored four goals in two ACC wins over the past week, including a hat trick in a 6-0 defeat of Pittsburgh and the lone goal in Virginia’s 1-0 victory at Notre Dame.

M Brooke Ramsier, Auburn – The holding midfielder doesn’t get her name on the score sheet too often, but when she does, it bodes well for Auburn. Now 7-0 when she has either a goal or an assist, Ramsier set up both goals in Auburn’s 2-1 victory against Kentucky, and then she notched a goal against Mississippi State on Sunday.

F Nia Stallings, Rice – An impressive effort from Stallings led Rice to a pair of important CUSA road wins. She scored the go-ahead goal against UTSA before eventually assisting on the game winner. On Sunday, she provided the game winner in a victory against UTEP.

F Alexis Pelafas, Central Michigan – In contention for the Golden Boot, Pelafas helped CMU come-from-behind to defeat Bowling Green and extend its record to 12-1-1. Down a goal against Bowling Green in the final 10 minutes, Pelafas bagged the equalizer and setup Madison Costner’s game winner.

F Savannah Jordan, Florida – A four-goal outburst in SEC play led the Gators to straightforward wins against Mississippi and Georgia over the weekend. Jordan now has 12 goals on the season.