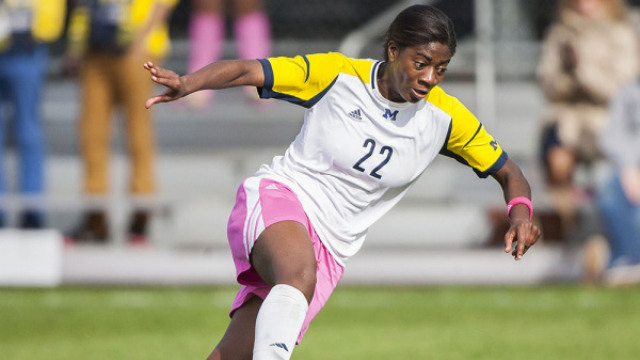 With the regular season winding down, each conference game can prove pivotal in determining conference titles.

In particular, Michigan’s Nkem Eziruke delivered in a pair of victories. The Canadian international scored the lone goal in a 1-0 win over Indiana on Thursday. Against Purdue on Sunday, she came through again, scoring twice, including the game winner, in a 3-1 victory. 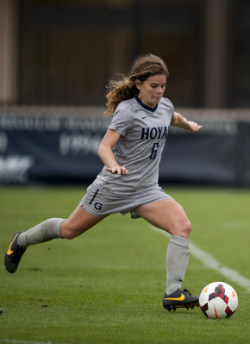 The pair of clutch performances earns Eziruke TopDrawerSoccer.com Player of the Week honors.

Here’s a look at the complete TopDrawerSoccer.com Team of the Week:

GK Emma Stevens, Nebraska: The Huskers took to the road and got both conference results they needed, winning against Wisconsin and Minnesota. Stevens made six saves in each game, becoming the all-time leader in saves at Nebraska with 245 career stops.

D Karina Gutsche, Florida: Gutsche helped set the tone for the Gators at the back in what was a suffocating weekend for the team’s defense. Florida beat both Kentucky and LSU by 3-0 scores, shutting down two very good offenses.

D Emily Sonnett, Virginia: The stellar season continued for the Cavaliers, and Sonnett back stopped a pair of shutout wins, including a 2-0 defeat of North Carolina on Sunday.

D Meghan Streight, Texas A&M: The center back played 180 minutes across a pair of SEC victories over the weekend. Streight also notched an assist as the Aggies extended their winning streak to six games.

MF Daphne Corboz, Georgetown: The Hoya midfield maestro helped power the Georgetown offense to a pair of 4-0 wins. Corboz notched a goal in a 4-0 win against St. John's on Thursday, and inspired a 4-0 victory against Creighton on Sunday, where she scored and had two assists.

MF Julie Johnston, Santa Clara: Winner of six straight now, Johnston was instrumental in the Broncos’ latest pair of victories. She scored twice in just 35 minutes of action as Santa Clara amassed a 4-0 halftime lead against St. Mary's (CA) on the way to a win by the same score. Johnston also played 90 minutes as Santa Clara also beat Pacific 2-0.

F Ashleigh Ellenwood, Arkansas: The striker helped the Razorbacks win a pair of shootouts. First, she bagged two goals (including the game winner) and added an assist in a 5-4 overtime win over Vanderbilt. Then, she played a reserve role, coming off the bench and scoring the equalizer and assisting on the game winning goal in a 2-1 defeat of Tennessee on Sunday.

F Nkem Ezurike, Michigan: Clutch performances, game winning goals and becoming the program’s all-time leading scorer. Not a bad weekend for the Canadian international, as Ezurike scored the only goal in a 1-0 win over Indiana and helped lead a come-from-behind 3-1 victory against Purdue.

F Cheyna Williams, Vanderbilt: It was an impressive offense output for Williams, as she scored five goals across two games, adding a pair of assists to her haul. She scored twice in a 5-4 loss at the hands of Arkansas, but helped the Commodores rally with a hat trick in a defeat of Mississippi State, the team’s first SEC win of the season.

F Maya Hayes, Penn State: After enduring a two-game losing streak – quite rare in recent Nittany Lion history – Hayes helped fire Penn State back into the win column. She scored twice, including the game winner against Ohio State in a 4-2 victory, and got on the score sheet again as the Nittany Lions rolled past Illinois 5-0.