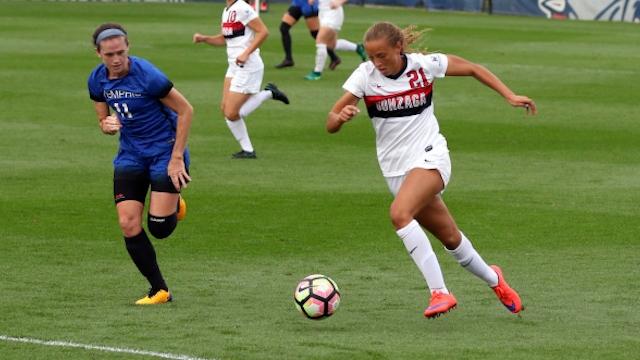 With some upsets among the Top 25 teams, there were plenty of candidates for the TopDrawerSoccer Women’s Division I Team of the Week. There were goal scorers that spurred comebacks and goalkeepers that helped make history.

D Nicole Molen, USC - Molen recorded an assist in the 2-1 win over Loyola Marymount. She was also a key player in the 3-1 win over San Diego.

M Jaye Boissiere, Stanford - Boissiere scored a goal and assisted on the game-winner against Santa Clara on Sunday.

M Vanessa Flores, West Virginia - Flores scored the lone goal in West Virginia’s 1-0 win over Princeton. She was also a key player in the victory over La Salle.

M Imani Dorsey, Duke - Dorsey scored a goal and recorded an assist in the Blue Devils’ 3-0 win over Virginia Tech on Sunday.

F Deanne Rose, Florida - Rose scored the equalizer and the game-winner on Sunday in the 2-1 win over Iowa State.

F Bridget Daley, Idaho - Idaho was trailing 4-1 in the second half to Memphis before Daley and her teammates charged to a 5-4 win. Daley scored two goals in the comeback victory. She also had the game-winner in the 6-0 win over Nevada.