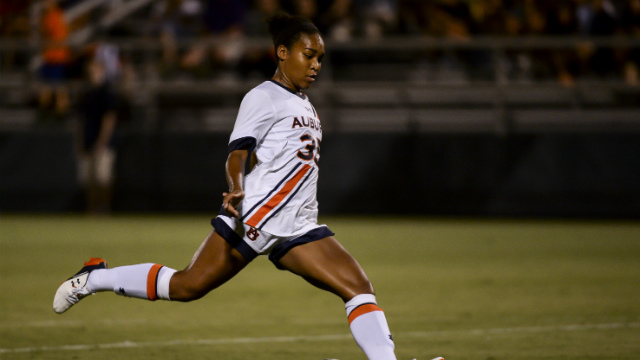 Call it an SEC surprise.

Auburn went on the road last week and completely flummoxed Florida, defeating the Gators 3-0 in Gainesville thanks to a tremendous two-goal effort from Kristen Dodson.

She also won a penalty against Florida, and went on to score twice and added two assists in Auburn’s 4-2 defeat of Georgia on Sunday. Her prodigious output secures Player of the Week honors.

See who joins Dodson on the latest Team of the Week.

GK Christine Etzel, Brown – The sophomore netminder added two more clean sheets this season, shutting out Sacred Heart and Dartmouth. She has allowed one goal so far this season as the Bears opened up their Ivy League schedule with a 1-0 defeat of the Big Green.

D Erin Smith, Rutgers – Smith provided cover at the back for the Scarlet Knights, playing 200 minutes as Rutgers blanked both Northwestern and Illinois.

D Cristina DeZeeuw, Vanderbilt – De Zeeuw played every minute of two shutout wins against Texas A&M and LSU, as the Commodores enjoyed a stellar outing at home. She also got on the score sheet in the win over LSU.

D Natalie Neshat, Columbia – Neshat and Columbia opened the Ivy League in ideal fashion, with a goal and shutout in a 2-0 defeat of Cornell. Neshat also had a goal and assist, playing limited time on Sunday in a 4-0 victory against Wagner.

M Josee Stiever, Minnesota – The Gophers swept a weekend road trip to Indiana, topping the Hoosiers and Boilermakers. Stiever was at the heart of the victories, netting the game winner in Sunday’s win over Purdue, while she also setup the first goal in a 3-0 victory against IU.

M Jessie Fleming, UCLA – Two more goals from the freshman sensation led UCLA to a winning outing in the Pac-12 opener against Arizona State. Fleming continues to impress for the Bruins, and is one of the nation’s top freshmen.

M Imani Dorsey, Duke – The Blue Devil offense burst to life on Sunday, scoring four times in a victory against Virginia Tech. Dorsey led the way with two goals and one assist.

F Treva Aycock, Furman – After missing seven games with a concussion, the freshman forward returned with a bang for the Paladins. In her return to action, she scored a goal and added an assist in a 4-0 win over Chattanooga. Aycock went on to score a match-winning hat trick in a 3-2 win against Samford.

F Kristen Dodson, Auburn – As impressive of a week as any player has enjoyed this season, Dodson had a hand in six of Auburn’s seven goals in two huge SEC wins. She scored four goals, added two assists and drew a penalty.

F Chloe Williams, Eastern Washington – It’s been a strong start to the Big Sky schedule for EWU, and Williams was central in the success of last week. Williams scored game-winning goals from the penalty spot in wins against Idaho and Idaho State

F Arielle Ship, California – The reigning Pac-12 Player of the Year had a hat trick of assists for the Golden Bears in their 3-0 defeat of Oregon State.