Article Written by Delete this
Comments

So far, the Texas A&M attack looks like one of the nation’s best.

Seven goals across two games over the past weekend saw the Aggies extend their record to 4-0 on the campaign, and the College Station program also provided this week’s TopDrawerSoccer.com Player of the Week.

One of many impressive offensive performances over the past few days, Aggie attacker Kelley Monogue scored three goals and added two assists in two wins, including a pair of goals and an assist in a 3-0 defeat of UCF on Friday. 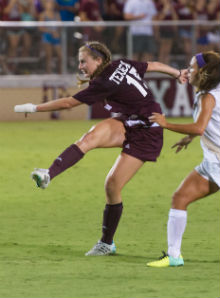 Monogue’s hot start to the season has been a big part of the Aggies perfect start to the 2014 campaign, as she’s scored five goals and chipped in three assists.

Below is the complete TDS women’s Team of the Week.

GK Abby Smith, Texas: The U.S. youth international made a total of 12 saves in two games as the Longhorns drew Arkansas 0-0 on Friday and topped Nevada 5-1 on Sunday. Smith’s performance against the Razorbacks was particularly of note, as her seven saves kept the game scoreless.

D Abby Dahlkemper, UCLA: The Bruin defense continues to suffocate its opposition, holing North Carolina without a shot on goal in a 0-0 draw on Friday and conceding just one on goal in a 2-0 defeat of San Diego on Sunday. The senior played all 200 minutes in central defense during the two games for the Bruins.

D Courtney Assumma, Pepperdine: A key defender for the Waves, Assumma scored in a 4-0 win over Florida Atlantic and helped keep a 1-0 shutout of North Carolina on Sunday, playing 171 minutes over the weekend.

M Reilly Parker, USC: After scoring the insurance goal in a 3-1 Friday win against Iowa State, Parker nabbed the game-winning tally in a massive 2-1 victory over Notre Dame.

M Daphne Corboz, Georgetown: Corboz has shot out of the gates for the Hoyas, scoring three times and setting up three other goals over the weekend as the Georgetown attack put NC State and Towson to the sword, scoring 11 goals in two games. She now has four goals and five assists in four games.

M Dagny Brynjarsdottir, Florida State: The senior standout stepped up and delivered for the Seminoles, scoring two goals – one to tie the game against Oklahoma State and a winner against Oklahoma – as the ACC power won two games on the road.

M Liana Salazar, Kansas: Three goals and an assist for Salazar helped to propel the Jayhawks to a pair of wins, including an impressive 4-1 defeat of Wake Forest.

F Kelley Monogue, Texas A&M: Can Monogue keep it up this season? Her scintillating form in the final third bodes well for Aggie success in 2014. Eight points in two days is an impressive haul.

F Vanessa Skrumbis, Georgetown: The senior forward scored four goals and notched an assist as part of the Hoyas’ offense was in fine form. She’s now at six goals on the season, off to a great start to 2014.

F Lynn Williams, Pepperdine: The outstanding forward scored twice and assisted in a pair of wins, including a 1-0 win at home against North Carolina.