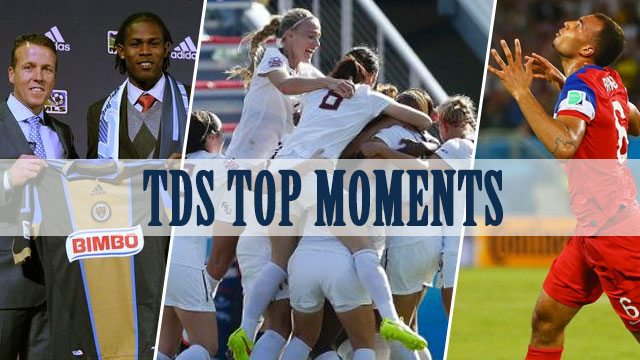 Looking back, 2014 was a heck of a year. From a pair of World Cups to an eventful MLS draft to a College Cup series without equal, TopDrawerSoccer.com was there to cover it all. Here’s a look at a selection of our site’s best stories from a year without equal.

Before 2014, a goalkeeper had never been selected with the No. 1 overall pick in the draft. That changed in Philadelphia, where the Union traded up to the top spot to select Connecticut’s Andre Blake on a smash-and-grab day. What we didn’t know at the time was that the Union didn’t really have a plan for Blake, who rotted on the bench for most of the season and doesn’t appear to have any better prospects for 2015.

Every year, February’s signing day is a frantic dash to sundown. Commitments stream in throughout the day as prospects big and small make their college picks final. The 2014 edition was no exception, and there was no site on the web that brought you comprehensive soccer commitment coverage like TDS. Our massive live update thread took into account all of the madness over the course of the day, and it reflects how helter-skelter the event can be.

As for specific highlights, there was the pro divide in college soccer, how colleges build recruiting classes, big story lines that emerged out of the day and more. If you wanted signing day coverage, we had it in spades.

There weren’t many more interesting stories in 2014 than J.R. Eskilson’s outstanding story on Abu Danladi’s tale of how he traveled from Ghana to UCLA to star as a sensational freshman forward. From sitting on his friend’s lap on the bus to winning the Gatorade High School Player of the Year trophy, the first half of Danladi’s 2014 was a wild ride in itself.

But that was before Danladi’s college career began. He was an incendiary threat for the Bruins and helped guide them in the College Cup final, where he started for one of the nation’s best college teams. Whatever’s next for Danladi - whether that’s the pros or another year or two in college - his 2014 defied the odds.

The Pac-12 has gradually become the destination of choice among some of the nation’s top recruits. It isn’t just UCLA and the rest anymore. That’s never been more evident on the women’s side than this year, when UCLA and Stanford and Cal scored big on the recruiting trail. Stanford owned last year thanks in part to the commitment of Andi Sullivan, who just completed an outstanding freshman campaign. This year, California made a splash by inking No. 1 2017 recruit Catarina Macario, a coup in any translation.

But UCLA was not be denied. Canadian super-recruit Jessie Fleming, who’s debuted with the full national team already, committed her future to the Bruins late in the year for the class of 2016. That’ll give UCLA a cornerstone to build around for next year’s freshman haul, which will attempt to replace the most prolific senior class in program history.

The most obvious soccer showcase of the global soccer calendar was the World Cup in Brazil, which finished with Germany’s dazzling win over Argentina in the finale. For its part, the U.S. managed to navigate through a tough group draw with a win over Ghana, a draw against Portugal and a tight loss to Germany presaged a loss to Belgium in the first knockout round. TopDrawerSoccer.com might not have had boots on the ground, but we did dive deep into the developmental backgrounds of all 23 players on the U.S. squad. Ever want to know how Jozy Altidore got his start? Or who developed Chris Wondolowski? Fret no more.

Check out our entire five-part series below, and all of our pre-coverage here.

U.S. struggles at the U20 Women’s World Cup

The lone U.S. Youth National Team World Cup last year was the U20 Women’s World Cup in Canada in August. There was plenty of expectation swirling around the stars and bars, who won the tournament in 2012 and seemingly returned the talent to do it again. Things didn’t go that well. After smashing out of the group stage, the U.S. hit a wall with North Korea, which dumped the U.S. out of the tournament in the first knockout round.

There were some encouraging things to take from the tournament, but issues around Michelle French’s 4-2-4 formation ultimately sent the side to its doom. The bonus is that role player Mallory Pugh, arguably the best U17 women’s player in the world, is only getting started.

There isn’t a more prominent obscurity-to-limelight story in the USMNT pantheon right now than the one fronted by Miguel Ibarra, which we brought you here after his USMNT debut in October. The story might’ve been all about Landon Donovan’s farewell, but Ibarra, whose locker was next to Donovan’s in Connecticut, carved out a sliver of the spotlight for himself.

His story hits on a number of prominent plot points in American development. Ibarra wasn’t scouted out of college because he wasn’t close to a Development Academy team. He eventually made his way to the pros through junior college, UC Irvine and eventually the NASL. That’s where Jurgen Klinsmann picked up his story, leading some to believe if the system is doing a good enough job identifying its talent at a root level.

For Florida State, the path to the title didn’t go through UCLA this time, but their win was just as impressive due to Virginia’s prodigious attacking power. And while Virginia couldn’t pull it off, Morgan Brian’s showcase wasn’t lost on Travis Clark, who was there to see the show. On the men’s side, Virginia utilized a somewhat controversial tactic by parking a bus (“two buses” according to UCLA coach Jorge Salcedo) en route to a shutout and an eventual win in penalties. It revived the winning vs. winning with style debate, but the Cavaliers won’t be bothered. They went home with the college game’s ultimate prize.

The annual high school All-American games descended on Raleigh, North Carolina in conjunction with the men's College Cup, as some of the best high school players from fall action made the trip. Both west squads dominated the action, with a number of future Division I stars on display.