And that’s certainly the case for these ten freshmen, each who contributed something special to a prominent program over the course of 2011.

For a few of these listed, the season is going to be shortened because of their talent, as they’ll be in Japan from August-September competing for the U20 World Cup. 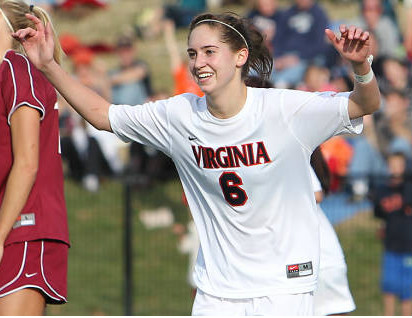 Regardless of their availability at the beginning of the season, high expectations follow them around for a reason.

The highly regarded recruit lived up to her billing – and then some – in a sensational freshman year. The midfielder did it all, buzzing around the field, winning balls, scoring a bit here and there (11 goals, 8 assists), and helping the team to the quarterfinals of the tournament.

Her absence for the U20 World Cup is certainly going to be a challenge for her and her team to overcome, but look for Brian to come storming back and have another outstanding – albeit abbreviated – year.

In what was a strong year overall for the La Salle women’s program, Haycook was one of many reasons for the 15-win season, as she found the back of the net 16 times in 20 games. Replicating that performance, now that she’s a known quantity, is going to be vital.

And of course, the Explorers will want to go further than their first round exit at the hands of Maryland in last year’s NCAA tournament.

A stud at the back, Dahlkemper started and played in all 21 of UCLA’s game, leading a defense that conceded on 12 goals throughout the entire season. The team finished in the top 10 in shutouts as well, with 13 overall.

Dahlkemper and the rest of the team need to continue to take steps forward in the hopes of knocking off California rivals and reigning national champions Stanford.

The leading goal scorer among first year players didn’t reside in one of the power conference, but rather in the Missouri Valley in Rachel Tejada. Her 21 goals was one of many elements in a dominant season for the Redbird soccer program.

With aspirations to build on that success and make an even bigger impression on the national scale, Tejada is vital to those hopes becoming a reality in 2012.

Ingrid Wells may have moved on, but there’s a replacement already waiting in the wings who will be a sophomore this fall in Corboz.

In her first season, Corboz played more of a wide role as Wells did her thing in the middle of the field, but the talent from the first-year midfielder was quite obvious, as she scored 10 goals for the Hoyas.

Of course, with the departure of Well,s the expectations become that much higher for Corboz to create goals as well as score them.

This year is going to look a bit different for Texas A&M and Monogue, as the team is moving to the SEC. As a freshman, she punished Big 12 defenses, amassing 19 goals and adding 9 assists to really drive the Aggie offense.

Her adaptation to a new conference as a sophomore is vital for A&M to go through a smooth transition into new territory.

The Canadian shot-stopper had a fantastic freshmen year, logging the majority of minutes in goal. She capped things off this past May with a call-up to the senior Canadian women’s national team.

While she’s likely to have an impact this year, D’Angelo also falls into the camp of players heading to the U20 World Cup, so she’ll miss a chunk of the upcoming season.

The midfield stalwart for the Demon Deacons last year, the reliable Ridgik set a school single-season record for starts with 26 – in her freshmen year. And while she didn’t dazzle with wild offensive numbers, she scored some big goals and made things happen against tough opposition.

The numbers tell the tale for Ubogagu, with 10 goals and 10 assists for the national champions. Her pace, power and ability to get behind opposing defenses are just a few of the traits that make her special. She’s expected to make the U.S. U20 roster for the upcoming World Cup, and will leave a big hole in the Cardinal attack.

Regardless, expect her to come back and hit the ground running upon return.

Her six goals and eight assists played a massive role in Pepperdine’s regular season success. What she can manage for an encore, and how she combines with senior Anisa Guajardo is going to be key for this rising program.