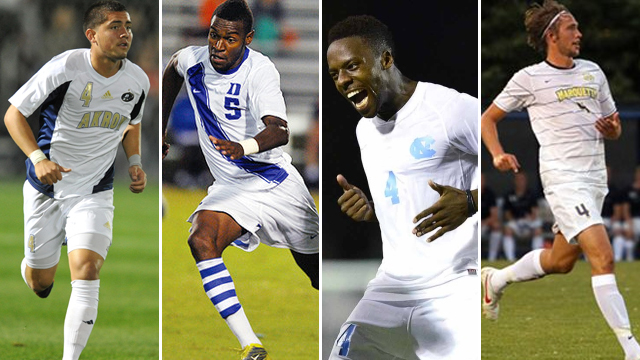 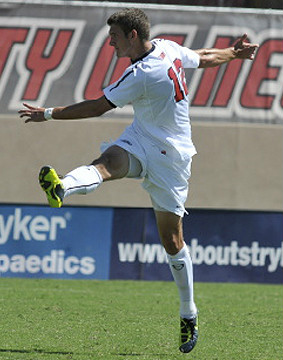 First up, a look at some of the best defenders in men’s college soccer – in no particular order:

Bryan Gallego, Akron, Junior: The stakes will be relatively high for Gallego entering his junior year at Akron. There’s a new head coach in Jared Embick, and Gallego will be one of the team captain’s, expected to lead from his center back role on a team that aims to maintain the high standards it set under Caleb Porter over the last five years.

Nick Hagglund, Xavier, Senior: A Second Team All American in 2012, Hagglund was a central figure to Xavier’s success, laying the foundation for impressive performances with his leadership and defensive abilities at the back. Hagglund led the team in minutes played, on the field for 2,027 in total, getting just 53 minutes off. Another stout center back, he has plenty of potential and will once again get the chance to show what he can do in 2013.

Sebastien Ibeagha, Duke, Senior: The central defender rebuffed offers of a pro contract from the Houston Dynamo during the offseason, much to the delight of Blue Devil coaches. Ibeagha was at the heart of an extremely stout defense last year, and is going to be one of the best once again this year.

Anthony Manning, Saint Louis, Junior: The Dallas Texans products has already amassed more than 3,000 minutes in his first two seasons in the college ranks, and is a big part of the Bilikens slowly creepy back onto the national stage. Another central defender with a lot of poise and skill on the ball, he’s certain to be a prominent figure once again this year for Saint Louis’ rapidly improving squad.

Boyd Okwuonu, North Carolina, Junior: The undersized center back has been solid and sturdy during his two seasons at Chapel Hill, and earned a spot on the U20 Men’s National Team that qualified for the World Cup. His size raises questions about his pro future, but he is one of the more dominant central defenders at the collegiate level.

Jalen Robinson, Wake Forest, Sophomore: Slotting into the central defense of an ACC program is no small feat, and it’s something that Jalen Robinson managed with relative ease during his first season in Winston-Salem. An extremely athletic and tenacious player, Robinson will only continue to improve with more seasoning under Jay Vidovich.

Aaron Simmons, UCLA, Junior: After starting every game the past two seasons at SMU, Simmons made the decision to head west and transferred to UCLA, where he’ll spend the last two seasons of his collegiate career. A player of his quality should have no problem slotting into a new back line, and he becomes one of the best defenders on the roster.

Axel Sjoberg, Marquette, Sophomore: The former hockey player from Sweden stands out on the field at 6-foot-7, and was a crucial addition to Marquette in its successful 2012 campaign. Along with being mobile enough at his height, Sjoberg wins everything in the air – as you’d expect from someone that tall – and is a dangerous threat to score on set pieces.

Ben Sweat, South Florida, Senior: A consistent presence on the left flank for USF, Sweat is the premier outside back in the senior class. He can shut down the opposition’s right wing, while also adding something to the attack going forward when in possession.

Kyle Venter, New Mexico, Senior: An outstanding central defender, Venter is a two-time All American who could easily have made the transition to the pro ranks this year. And while that obviously didn’t materialize, he’ll bring stability to a stout Lobos team, and look to earn national honors for a third year running while also guiding New Mexico deep into the NCAA tournament.