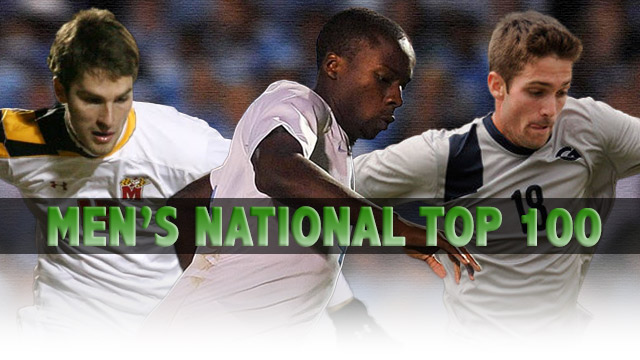 Patrick Mullins surprised many people when he decided to return for his senior season at Maryland after winning the ultimate individual honor in college soccer, the MAC Hermann Trophy. Mullins’ return to the grassy fields in College Park means he also holds the distinction as the No. 1 player in the TopDrawerSoccer.com preseason top 100 men’s college soccer player ranking.

The top 100 list comes on the heels of TopDrawerSoccer.com’s announcement of the preseason best XI list, which was released last Tuesday. The top 100 list includes only players from Division I and excludes freshmen who will be recognized in the midseason update with a freshmen top 100 ranking.

As usual with the college ranking, the input and expertise of the current staff at TopDrawerSoccer.com was utilized to compile this list and the conference top 20 players lists, which will be released in the coming weeks.

Mullins holds the top spot, but close on his heels is Connecticut star Andre Blake, who was the best goalkeeper in college soccer last season as a sophomore. Blake will have some new faces in front of him in Storrs this season, but there are still high expectations for the future pro.

Venter’s teammate Michael Calderon is the next ‘West Coast’ player to make the list at number 12. The lack of players from the Big West, West Coast Conference, and Pac-12 can be attributed to the early matriculation of the top players from those leagues to the professional ranks. Recently, UC Santa Barbara star Ema Boateng made it one and done when he signed with HIF in Sweden.