Throughout the college season, TopDrawerSoccer.com is tracking the performances of a variety of MLS Academy products in the college ranks.

Here’s a look at some of the performances over the last week:

MF Ian Christianson, Georgetown (Chicago Fire, Senior): The tall midfielder continued to play well and rack up heavy minutes as the Hoyas picked up another two wins over last weekend.

MF Bryan Ciesiulka, Marquette (Chicago Fire, Junior): The midfielder had plenty of influence over last weekend, assisting on game winning goal over UIC and bagged one of his own against Drake.

D Scott Lakin, Northwestern (Chicago Fire, Junior): The left back started both of Northwestern’s game over the holiday weekend, as the Wildcats were down in South Carolina, where they beat Kentucky 2-1 and drew 0-0 with South Carolina. 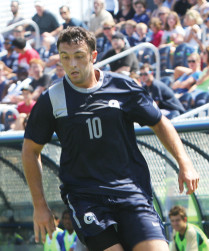 D Brendan Hines-Ike, Creighton (Chivas USA, Freshman): Continued to come off the bench for the Blue Jays, playing 26 minutes against Akron and 76 against Rutgers on Sunday.

MF Dillon Serna, Akron (Colorado Rapids, Freshman): Serna started at left back against Creighton in a 1-1 draw, before coming off the bench in a 2-1 win over SIU Edwardsville.

D Chad Barson, Akron (Columbus Crew, Senior): The rugged center back started in both of Akron’s game over the past week and grabbed a goal in the 2-1 win against SIU Edwardsville.

MF Wil Trapp, Akron (Columbus Crew, Sophomore): The linking midfielder was back in the starting lineup and logged heavy minutes in both of Akron’s games.

D Matt Wiet, UCLA (Columbus Crew, Senior): Played every minute during the Bruins’ 2-2 draw against Maryland and 1-0 win over Virginia.

MF Collin Martin, Wake Forest (D.C. United, Freshman): Martin came off the bench and played 59 minutes in Wake’s 3-1 defeat of Boston University, before returning to the starting lineup and going 76 minutes in a 1-0 defeat of West Virginia.

D Tyler Rudy, Georgetown (D.C. United, Sophomore): Rudy continued to show off his versatility, getting two starts over last weekend and playing both along the back and in the midfield.

D Mikey Ambrose, Maryland (FC Dallas, Freshman): With Taylor Kemp fighting off an injury, Ambrose started both games at left back for the Terps over the past week, a 2-2 draw against UCLA and a 6-0 win over California.

D Boyd Okwuonu, North Carolina (FC Dallas, Sophomore): One of the best CBs in the nation, Okwuonu played all 180 possible minutes over the past two games.

F Bradlee Baladez, South Carolina (FC Dallas, Junior): Northwestern and St. John’s shut out the Gamcocks attack over the weekend. Baladez managed to get a few shots on target but saw all of them saved.

MF Daniel Garcia, North Carolina (FC Dallas, Freshman): After coming on as a substitute in his first game, Garcia started both games for the Tar Heels last week, and provided an assist on the game winning goal in a 1-0 win against West Virginia.

D Sebastien Ibeagha, Duke (Houston Dynamo, Junior): A hulking center back, Ibeagha played all 180 possible minutes over last weekend, grabbing a goal and an assist along the way.

F Gyasi Zardes, CSU Bakersfield (LA Galaxy, Junior): There is little room to operate when every coach in the nation knows you are the only threat on the field. Bakersfield needs to find a way to draw some attention off Zardes or else this could be a long season.

MF Grady Howe, UCLA (LA Galaxy, Freshman): The defensive midfielder immediately stepped into a starting position with the Bruins against New Mexico in the opening game. This week, he showed his versatility with a move to right back for the game against Maryland.

F Cole Denormandie, Cincinnati (New England Revolution, Sophomore): The striker added an assist to his season tally in a 2-1 to Xavier on Sunday.

MF Scott Caldwell, Akron (New England Revolution, Senior): After logging 110 minutes in the 1-1 draw against Creighton, Caldwell started against SIU Edwardsville and notched an assist in the 2-1 win.

GK Keith Cardona, Maryland (New York Red Bulls, Sophomore): It would appear that Cardona has won the No. 1 jersey in College Park after starting and playing 90 minutes in both games this past week.

D Bryan Gallego, Akron (New York Red Bulls, Sophomore): The center back started both of Akron’s games over the past week and scored the game winning goal against SIU Edwardsville.

MF Dan Metzger, Maryland (New York Red Bulls, Sophomore): Found the back of the net in Maryland’s 2-2 draw against UCLA and was a starter in both games for the Terps.

F Sean Okoli, Wake Forest (Seattle Sounders, Sophomore): Reduced to a substitute’s role in Wake’s games over the weekend, although he logged a combined 95 minutes in those two games.

F Nick Palodichuk, Duke (Seattle Sounders, Sophomore): Started both games for the Blue Devils and scored a goal in the team’s 2-1 win over Delaware on Sunday.

D DeAndre Yedlin, Akron (Seattle Sounders, Sophomore): Yedlin played all 110 minutes of the 1-1 draw against Creighton, and had a chance to lighten the load on Sunday as he came in off the bench in Akron’s win against SIU Edwardsville.

F Jordan Rideout, UMKC (Sporting Kansas City, Sophomore): The Sporting product notched his first goal of the season with a header against Saint Louis on Saturday.

F Allando Matheson, Connecticut (Toronto FC, Sophomore): It was a big weekend for the Toronto FC product, as he came off the bench in both of UConn’s games and scored a goal, including the only one in a 1-0 win over Michigan State on Monday.