Throughout the college season, TopDrawerSoccer.com is tracking the performances of a variety of MLS Academy products in the college ranks.

Here’s a look at some of the performances over the last week:

MF Ian Christianson, Georgetown (Chicago Fire, Senior): The industrious midfielder started both games and scored a goal on the weekend in Georgetown’s 1-1 draw against Wisconsin.

MF Bryan Ciesiulka, Marquette (Chicago Fire, Junior): Sat out Marquette’s 3-0 win over Western Illinois with an ankle injury but is expected to return for the games this weekend.

D Scott Lakin, Northwestern (Chicago Fire, Junior): The defender was tabbed on the All-Tournament team at the Northwestern Invite over the weekend. The Wildcats are 3-0-2 to start the season.

D Brendan Hines-Ike, Creighton (Chivas USA, Freshman): The Colorado-native is fighting his way into the rotation for the Jays, which is a big accomplishment for a freshman at this point in the season.

MF Dillon Serna, Akron (Colorado Rapids, Freshman): Miscast as a left back to fill a massive need for the Zips. It does not let the Rapids Academy product show off his best attributes.

D Chad Barson, Akron (Columbus Crew, Senior): There were a lot of subpar performances from the Zips in the 1-3 defeat to Notre Dame, but Barson and the rest of the Zips defense was exposed a bit when Akron could not retain possession. 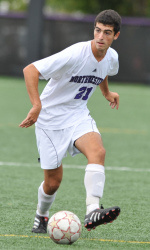 D Matt Wiet, UCLA (Columbus Crew, Senior): The center back and the rest of the Bruins defense have settled down over the last few games. Wiet played 180 minutes in the two games last weekend against Tulsa and UC Irvine.

MF Collin Martin, Wake Forest (D.C. United, Freshman): The attacking midfielder started and went 88 minutes in a 1-1 draw against Clemson. He was back in the starting lineup as Wake lost its first game Tuesday night, 3-2 in overtime against Louisville.

D Tyler Rudy, Georgetown (D.C. United, Sophomore): Continued to earn the starting nod in both of Georgetown’s games over the weekend as he spends time in midfield now. Only went 43 minutes in a double overtime game against Wisconsin.

D Jalen Robinson, Wake Forest (D.C. United, Freshman): Transition to the college game has been no problem for Robinson, who started at his center back spot and went 110 minutes in Wake’s 1-1 draw against Clemson. Also started Wake’s 3-2 loss to Louisville.

D Mikey Ambrose, Maryland (FC Dallas, Freshman): Held on to his right back spot in a 4-0 win against Boston College. Added an assist in Maryland’s 3-1 win over UMBC on Tuesday.

D London Woodberry, Maryland (FC Dallas, Senior): Kept things tight at the back as Maryland had a second straight shutout, winning its ACC opener 4-0. Solid and steady in central defense against UMBC on Tuesday night.

D Boyd Okwuonu, North Carolina (FC Dallas, Sophomore): Despite the 0-1 loss to James Madison (and being on the hook for giving up the penalty kick), Okwuonu showed he can handle taller, more physical forwards with ease.

F Bradlee Baladez, South Carolina (FC Dallas, Junior): Surprisingly, Baladez has not scored yet this season despite leading the team in shots in nearly every game. The Gamecocks play a defensive style, so the lack of goals is not a concern, but it does deserve some attention.

D Sebastien Ibeagha, Duke (Houston Dynamo, Junior): Scored twice for Duke in a 3-0 win over Georgia State on Tuesday. His first goal displayed his next level athleticism with a commanding header off a corner kick.

F Gyasi Zardes, CSU Bakersfield (LA Galaxy, Junior): Sat out both of the Roadrunners games last week due to injury.

MF Grady Howe, UCLA (LA Galaxy, Freshman): The local boy has locked down the right back spot for the Bruins and added some consistency to the defense.

F Cole Denormandie, Cincinnati (New England Revolution, Sophomore): The problem for Denormandie is the lack of service and opportunities. As the lone striker on a struggling program, this is setting for a long season for the Revolution product.

MF Scott Caldwell, Akron (New England Revolution, Senior): The leader of the Akron Zips started Sunday brightly with a goal in the opening minutes, but failed to get a hold of it after the Zips went down a man.

GK Keith Cardona, Maryland (New York Red Bulls, Sophomore): Picked up a second straight shutout between the pipes as the Terps crushed Boston College 4-0. However, Cardona was on the bench for the first time, as Jordan Tatum got the nod in Maryland’s 3-1 win over UMBC.

F Brandon Allen, Georgetown (New York Red Bulls, Freshman): Scoring goals at the college level continues to not be too much of a problem for Allen, as he bagged his fourth goal in six games in Georgetown’s 3-2 win against UIC. Started but didn’t score in their 1-1 draw against Wisconsin.

D Bryan Gallego, Akron (New York Red Bulls, Sophomore): Showed a bit of immaturity when the referee’s whistle was not going in Akron’s way during the 1-3 loss to Notre Dame on Sunday.

MF Dan Metzger, Maryland (New York Red Bulls, Sophomore): Maintained his spot in the Terrapin starting lineup in the midfield but didn’t get on the scoresheet.

F Sean Okoli, Wake Forest (Seattle Sounders, Sophomore): Earned the starting nod, but had an up and down game for the Demon Deacons in a 1-1 draw against Clemson. Whistled for a handball in the box that the Tigers converted for a goal, but made up for it by scoring Wake’s only goal of the game. Netted the second goal for Wake Forest in a 3-2 overtime defeat to Louisville.

F Nick Palodichuk, Duke (Seattle Sounders, Sophomore): Scored a goal in Duke’s 3-0 win over Georgia State. Palodichuk scored his skill on the goal with a nice first touch and good composure in front of the goal.

D DeAndre Yedlin, Akron (Seattle Sounders, Sophomore): Yedlin is a next level talent, but there are subtleties he needs to reach before he is a next level player. The crossing needs to be more consistent and defending on the flank still is a bit rough, but he is on the short list of best outside backs in the nation regardless of class.