U20 MNT college players head back to school A handful of the best men’s college players from around the country are heading to their schools with a unique summer experience.

When the U.S. U20 Men’s National Team traveled to Northern Ireland to compete in the Milk Cup at the end of July, 11 of the 18 players on the roster had ties to college teams.

Some were just off solid freshmen seasons that had landed them on the radar of U20 head coach Tab Ramos, while others are entering their first season at the next level.

Whatever the case, the group had an up-and-down experience on the way to a fourth place finish at the summer competition.

“I thought overall it was good from the standpoint of playing good teams and getting that international exposure and playing international matches,” said Akron midfielder Wil Trapp. “It was a little disappointing we did so well in the third place game, and I thought we could have pulled out a win, and then gave up four goals in the second half. When you give up four goals you’re never going to win any games.” 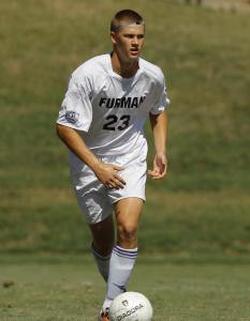 Trapp is referring to the final game of the competition. A pair of 1-0 results – a defeat against Denmark and a win over Turkey – earned the U20s a spot in the third place game against Chile.

After leading 1-0 at the half in the game against the South American team, the U.S. squandered four goals en route to a 4-3 loss to clinch the fourth place spot.

Added Furman defender Walker Zimmerman: “I think the results probably didn’t correspond with the way we played. For the majority of the games we were actually the better team and were able to create more chances than the opposition.

“Overall I think it was encouraging in the fact that we realized we could play with pretty much anyone, but it was a little disappointing not to get the results to go along with that.”

Zimmerman and Trapp were two of U20 players entering their sophomore year of college. Joining that pair back in school this fall are Dan Metzger, AJ Cochran, Eric Miller, Mikey Lopez and Boyd Okwuonu.

Having this sort of experience – along with the players who were on the U20 trip to South America earlier in the summer – will be extremely beneficial over the next two weeks of the preseason.

“I think the work ethic in these national team camps and realizing what it takes to be truly fit and to play fast, play hard for 90 minutes, I think that mentality will come back and hopefully reflect through the team at Furman,” Zimmerman said.

Two sets of players are actually teammates at prominent programs – Lopez and Okwuonu are part of the title-winning team at North Carolina from last fall, and Trapp was joined on the roster by two new Akron teammates, midfielder Dillon Serna and forward Alfred Koroma.

From that perspective, it was nice for Trapp to get to know two of his future teammates, not to mention getting the opportunity for them to train with him. He came away from the experience impressed by the duo.

“I think they are both very good players, very technical, smart, good with the ball, and good tactically,” he said. “It fits right into our style here at Akron so I think it’s going to transition very well in how we play here. I think they’re going to come in and contribute right away.”

For Trapp and the eleven other college players now back in school and in preseason, the upcoming college season is now all that more important, as the need to standout to impress Claudio Reyna is paramount with U20 qualifying scheduled for early 2013.

Play well, and it could mean a ticket to qualifiers. Slip up, and it could prove costly. But for someone like Trapp, it’s about focusing on what can be controlled.

“The way I look at it is if I do well for Akron, I do all the things that Caleb [Porter] wants me to do here, I think the opportunities with the U20s will always be there,” he said. “Just because the same style we play with the national team and with Akron transitions well.

“If I’m doing well here, playing well and winning games, I think it’s going to transition well and I’ll still be in the mix for the U20 squad and hopefully get called back.”