U20 MNT falls 2-1 to Railhawks reserve side 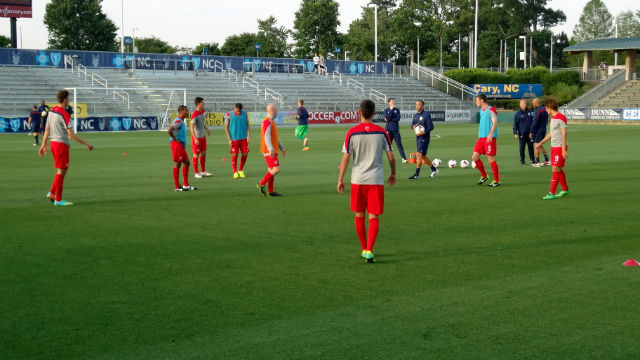 CARY, N.C. — This month’s U.S. Under-20 Men’s National Team training camp in Raleigh has the earmarks of a TV spin-off series. Let’s call it U20 MNT: The College Years. 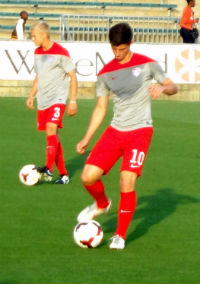 That said, it was a capable lot of college-age U-20s that faced a Carolina RailHawks’ lineup comprising of reservists and a bench filled with members of the U18 Capital Area RailHawks Developmental Academy team. A few regulars took the pitch for the RailHawks, including former MLS Generation Adidas signee Enzo Martinez and Nick Zimmerman, still working his way back into form after microfracture knee surgery last year.

A back and forth first half was devoid of much offense, save for an eye-popping golazo by the RailHawks’ Aaron King. Latching onto a turnover by Travis Wannemuehler at midfield, King spied a wayward Evan Louro venturing too far off his line. King let fly a seeing-eye shot that sailed over the US goalkeeper’s outstretched arm and nestled into the nylon.

In the 62nd minute, midfielder Leo Osaki doubled the RailHawks’ margin, entering a scrum in front of goal to poke in a score.

However, the U20s got a goal back in nifty fashion in the 69th minute. Defender Conor Donovan played a ball to second half sub Kainoa Bailey. Donovan overlapped and Bailey obliged with a return through ball up the left wing. The 6-foot-2 center back blazed a path toward the box, then played a low liner across to an unmarked Ian Harkes. Harkes settled the sphere, then deposited it past RailHawks’ keeper Scott Goodwin to account for the final 2-1 score.

“Coach talks about that sometimes the center back has to take space,” Donovan said. “Credit to Kai, he found me on a great run. I just continued my run and picked out a guy running through. And a great finish by Ian [Harkes].”

“Conor made a great run forward, got down the line and put a great ball in the box,” Harkes added. “I was lucky enough to be in the right spot at the right time and had a good finish.”

Indeed, the statuesque Donovan acquitted himself well in the defending third, controlling not only the air but also demonstrating some sound foot skills and tackling. In particular, in the 20th minute Donovan faced King in a 1-v1 situation in the box and managed to not only dispossess the striker with a timely tackle, but also control the loose ball and clear it from danger.

Bliss saw the match as a successful start to a camp aimed at further developing the talented U20 player pool.

“The nature of the pool of players that came to this camp was more about trying to generate more depth in that overall U20s pool,” Bliss said. “These are some guys that were called into previous camps, [but] weren’t able to come in or were injured or weren’t released. And then some other guys who were further down the depth chart we hadn’t had a chance to see yet.”

The U.S. U20s return to the pitch this Thursday, May 22 when they face the Carolina RailHawks U23 team on Field 2 at WakeMed Soccer Park. Kickoff is 6 p.m.