U20 MNT progresses as qualifying nears As February’s U20 World Cup qualifying tournament draws closer, the U.S. Under 20 MNT appears to be peaking at the right time.

Head coach Tab Ramos’ side put together an impressive performance in a closed door friendly against Venezuela at the end of December, winning 4-0 after a weeklong training camp down in Florida.

It was a strong way to finish a year, and in the opinion of some of the players, one of the best camps of the year. 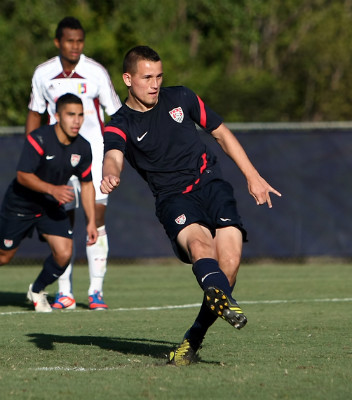 “I thought we did really well, the camp was probably the strongest one we had so far playing-wise and from a results standpoint,” midfielder Wil Trapp told TopDrawerSoccer.com. “We had a good week and then we ended well playing Venezuela and coming out with a 4-0 victory. That is something we really want to build off coming into the next few camps and qualifying as well.”

Added midfielder Mikey Lopez: “It was a good camp. The team looked better even though it was a new group, we got used to each other pretty quickly.”

It won’t be long again until another U20 camp takes place, as U.S. Soccer announced another weeklong camp to be held down in Puebla, Mexico starting on January 14. Preparations will take place there because the city is set to host the CONCACAF qualifying tournament starting on February 18.

Of course, plenty is still at stake for the players hoping to make it onto the final roster. While Ramos is familiar with a solid core of age eligible talents, certain players aren’t always available, especially those involved with professional teams abroad. However, it is something the coach is familiar with and is ready to adapt to.

“Every camp for us is a challenge on its own,” he said. “You always go into a camp with an idea of the players you’d like to have there, but also know that’s never really going to happen. At this point we’ve developed a core group of about 35 players and I can tell you that we are prepared to have any of the 35 moving forward.”

Candidates whose availability for the qualifying tournament is still up in the air include midfielder Marc Pelosi (Liverpool), defender John Anthony Brooks (Hertha Berlin) and Caleb Stanko (SC Freiburg) to name a few. Birmingham defender Will Packwood would also have been lumped in that group, but a horrific leg break suffered last weekend is set to knock him out for the rest of the season.

College players who were involved in the December camp, including midfielder Collin Martin (Wake Forest), Brandon Allen (Georgetown), Daniel Metzger (Maryland) and Boyd Okwuonu (North Carolina), will be among those hoping to sneak onto the qualifying roster if things don’t work out with the foreign-based players. Ramos was pleased with the level of the college players, although keeping them fit and sharp during the first two months of the year presents a unique challenge, something the coaching staff is moving to address.

“They contribute and obviously last camp was a good one for some of them because they had just finished their season so they were all in top form,” he said. “It’s a little bit more of a challenge to have them come along January, February because they’re not necessarily training all the time, so that’s something we’ll have to manage. It’s pretty much what comes with dealing with this particular age group, something that we have to handle.

“We have put together a camp leading up to our qualifying camp that will bring in six or seven of our college players and get them together to do some possible double sessions before the final group gets together in Mexico. We’re doing all we can to have the guys that are not playing to be as prepared as possible to be ready to help us.”

As the February tournament draws near, the U.S. did already learn its group opposition, as they are paired up against Haiti and Costa Rica. When the team does begin that challenge, it will serve as a reminder of the 2011 qualifying failure experienced last time.

But don’t expect the players to dwell on it at all.

“We haven’t really been thinking about that too much,” Trapp said. “Obviously we all know that the team didn’t qualify the last time around and it was something that we don’t want to happen to us. But it’s not something we focus on, to sit there and think we have to avenge anything. It’s more that this is our team this time around and we’re going to do everything we can to qualify and move on.”