The U.S. U20 squad turned in a shocking defensive effort Friday in a 4-1 loss to Spain in their opener at the U20 World Cup in Istanbul.

The U.S. opted to press high from the start out of a 4-2-3-1, a swashbuckling approach against such a technically proficient Spain side. For a time, after Jese's opener in the fifth minute, the U.S. led Spain in possession and looked to be on track. But a number of defensive lapses led Spain to a walkover in the second half, dropping the U.S. to the bottom of Group A after the first round of games. 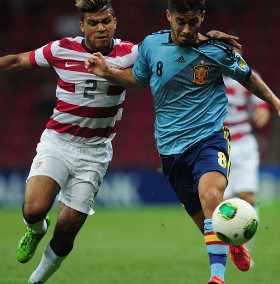 Here are Friday's player ratings. If not for Luis Gil, Friday's game could've been even uglier.

U20 Player Ratings vs. Spain

GK Cody Cropper, 5.0: Cropper had his shaky moments, but he wasn't directly at fault for a goal until Gerard Deulofeu filleted him for Spain's fourth and his second. Cropper came 20 yards off his line and, by the time he dove for the save, was two yards outside the box. Deulofeu had an easy tap-in for a 4-0 lead. While Cropper did make a few decent saves, he didn't do much to silence his detractors.

D DeAndre Yedlin, 6.0: Unsurprisingly, Yedlin was good going forward, serving in a few dangerous crosses and adding to the attack on the right. But against lightning-quick Spain, this often stretched the defense needlessly and left that side wide open to attack. He didn't exactly shut down Deulofeu — if such a thing is even possible — but he did get the better of him a time or two. Which is saying something.

D Caleb Stanko, 5.5: The captain had a so-so day, though he was probably the steadiest part of the back line (which wasn't saying much Friday). He overran Deulofeu on his beautiful curling goal toward the end of the first half, and he often pushed too high to try and prod the midfield into action. But Stanko had some bright moments and looked at times like the only competent defender.

D Javan Torre, 2.0: It's hard to sugarcoat Torre's day, which was nothing short of disastrous. Spain beat Torre like a drum all night. On Spain's first, Torre was torched over the top by Deulofeu and then failed to apply any pressure on the feed that set up Jese's easy goal. Luckily, he wasn't whistled for a sure penalty in the 18th minute and didn't step out on Deulofeu's first goal at the end of the first half. Hard to justify giving the UCLA backup any more minutes in Turkey.

D Juan Pablo Ocegueda: 4.5: Ocegueda was continually overrun on the left by Spain's dangerous attack. Unlike Yedlin, who was often able to track back to apply pressure, Ocegueda showed a wanton disregard for spacing and positioning. Unfortunately for Tab Ramos, left back is a continual sore spot in the U.S. player pool, so there aren't a ton of options here.

MF Benji Joya, 5.5: One of two central midfielders tasked with sitting back to protect Torre and Stanko, Joya didn't always look comfortable in his skin. He was too quick to fly forward and was cheap with possession when the US absolutely needed to be thrifty. It's clear Joya has ball skills, and he did complete some nice passes, but he wasn't as versatile as the U.S. needed him to be.

MF Wil Trapp, 5.5: Like Joya, Trapp is obviously competent on the ball but was too impatient. He was better recycling possession and hit a few good long balls, but both he and Joya often left enormous gaps between the midfield and the disorganized back line.

MF Danny Garcia, 6.5: Garcia was enjoying a bright, energetic game on the wing before taking an elbow to the back of the head in the 52nd minute that forced him off. He did well skipping through tackles and keeping possession alive at the edge of the penalty area. With more seasoning, it would seem FC Dallas just signed a very good one for the future.

MF Luis Gil, 7.0: Gil was already the man of the match before his stunning left-footed strike spun into the top right corner in the 76th minute. He sat in behind Hernandez and then Rodriguez as the primary creator, though he was too often forced to track back to help Trapp and Joya. Compact and plenty skillful, Gil was especially a joy to watch once Mikey Lopez was introduced.

F Jose Villarreal, 6.0: Villarreal had his moments and put in work on both flanks, but his attacks too often short-circuited. It seemed at times that Villarreal was all too willing to take an extra touch when a simple one-two would've done just fine.

F Alonso Hernandez, 5.5: Hernandez played as a lone striker before coming off at half with an apparent injury. He showed flashes but flubbed his only real chance off a brilliant through ball from Gil in the 13th minute. Especially in games when chances are at a premium, strikers should be expected to finish one-on-ones.

F Mario Rodriguez, 5.0: Rodriguez came on at halftime for Hernandez and did almost nothing of note, often drifting too far right and leaving Gil without a target up front.

F Daniel Cuevas, 5.5: Entered for Danny Garcia in the 56th minute on the left and offered bursts of his trademark playmaking ability. But it was clear he struggled to find the game's vein and never looked as dangerous as he's capable.

MF Mikey Lopez, 6.5: Came on for Villarreal in the 72nd minute and added another dimension with his versatility in the middle of the park. He unpinned Gil to track forward and did a better job than either Trapp or Joya of protecting his swamped center backs. He made a good case to start against France on Monday.