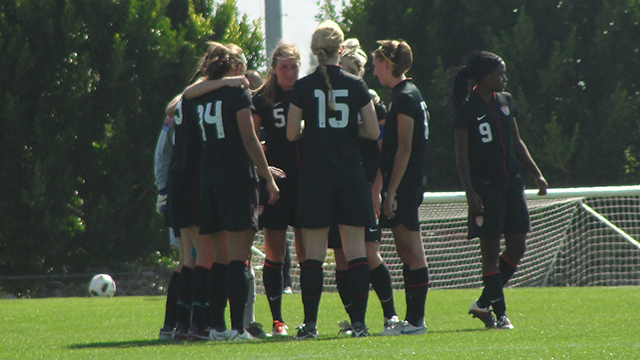 CARSON, Calif. – Only three days after the U.S. U20 Women’s National Team defeated China U20 4-1, the two teams took the field again.

But Sunday’s rematch hardly felt like the second game of a set. The U.S. only had four starters carry over into the weekend fixture, while China kept the lineup intact with only two switches.

“I think it is important we look at our entire team,” U.S. U20 WNT head coach Steve Swanson said about the new starting lineup for the second game. “In reality – with the timeline of games at the World Cup – every player matters over there. Everybody is important to the squad. From that standpoint, we are taking everyone seriously, not just the starters.”

The result did not change much though, as the U.S. cruised to a 3-0 victory behind goals from Katie Stengel, Chioma Ubogagu, and Samantha Mewis. The latter two also scored in the game on Thursday.

Stengel opened up the scoring only ten minutes after the opening whistle when her hustle netted her a true poacher's goal. China’s goalie, Yang Yan, fumbled a shot from distance and Stengel pounced on the free ball. The Wake Forest forward raced onto the loose ball, dribbled around the keeper, and then finished neatly from an acute angle.

The early goal did little to open up the proceedings or force either team into altering tactics. The U.S. continued to turn on the pressure and China seemed unable to escape its own half.

In the 28th minute, Stengel nearly had her second of the game when Lindsey Horan skated past a few feeble tackles and delivered a splendid cross to the far post for the determined forward. Stengel’s shot looked bound for the back of the net, but a recovering defender threw her body in front of the shot to hold off the U.S. momentarily.

Swanson’s group had another opportunity to widen the gap seconds before half when Ubogagu blazed past defenders and sent a cross to a wide-open Horan, but the North Carolina commit sent her shot wide of the post.

U.S. keeper Jami Kranich, in her first appearance with this youth national team, did not have to make a save in her lone half of action.

“I thought we had some good sequences at time especially in the final third,” Swanson said after the game. “But we had some areas where we could have been better – in terms of being more consistent. That is probably the biggest thing we are looking for more consistency.”

Swanson’s hint at a lack of consistency was reflected in the second half, as some of the substitutes failed to find the rhythm of the game and looked out of sorts at times. But the quality of some of the U.S. stars pushed the team to a pair of goals in the latter stanza.

The first came only five minutes after half. Stengel’s class showed once again with a marvelous cross to Ubogagu. The Stanford forward brought the ball down, fought off a couple defenders challenging for the ball, and ripped a shot past the keeper for her second goal of the week.

China amped up the pressure in the second half and had some positive spells, but could not find that bit of magic in the final third to break down the stout U.S. defense, which was led by Julie Johnston and Kassey Kallman on Sunday. Johnston started Thursday’s game in the midfield.

“We have to kind of play what if something happens and we need to move people around, what are our options,” Swanson added. “It is not just Julie [Johnston], it is other players as well. She did a good job for us today in the back.”

In the 65th minute, substitute Maya Hayes should have put the game on ice and taken it to the beach when she stole a questionable square ball across the back by China. The streaky Penn State forward was off to the races with the ball and only had the keeper to beat.

Hayes tried to put it under the keeper’s armpit, but Yan read the forward well and stopped the shot. Hayes knocked the rebound out of bounce with a stumbling first touch.

Hayes would get some form of revenge 26 minutes later, when she picked off another lazy pass and sprinted toward the goal. China’s retreating back four was forced to make some clumsy challenges and conceded a free kick 19 yards from goal.

Mewis, the UCLA midfielder, stepped up and curled the shot around the wall into the bottom corner of the net. The Massachusetts native ended the week with two goals and two assists in the friendlies against China.

Swanson revealed that the U.S. would return to camp in May with it likely to be held at the Home Depot Center again.