U20 WNT wraps up Nike Friendlies 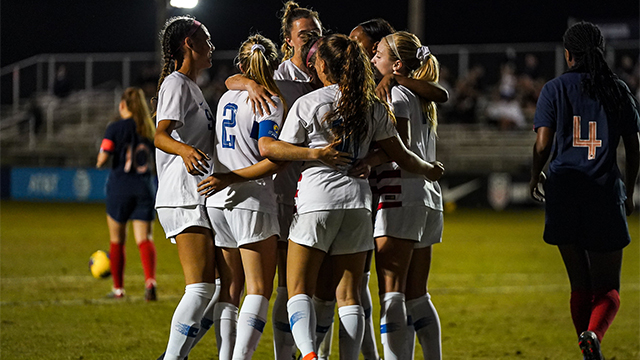 A split squad of the U.S. Under-20 Women’s National Team finished its involvement at the 2019 Nike Friendlies on a high note.

Two teams of U20 eligible players each lined up to face France and Brazil respectively on Wednesday and Friday, with the latter day going much better than the former. Divided up into red and blue squads, in four games, the two U.S. teams combined for a 1-2-1 record.

Finishing up with two games on Friday, the red lineup drew 0-0 against Brazil, while first-half goals Alexa Spaanstra and Trinity Rodman were enough to help the U.S. beat France by a 2-1 score.

In the first two opening games of the Friendlies, both U20 teams saw defeat. The red lineup fell by a 2-0 score at the hands of France.

And the blue squad got off to a similarly poor start, going down by a 3-0 score against Brazil before the break. But the U.S. team showed life, getting quick goals from Summer Yates and Jenna Nighswonger to cut the lead down to 3-2. However, Brazil would score next and see out the 4-2 victory.

Summer Yates shoots a 🚀 to the back of the net and gets the U-20 #USWNT started!