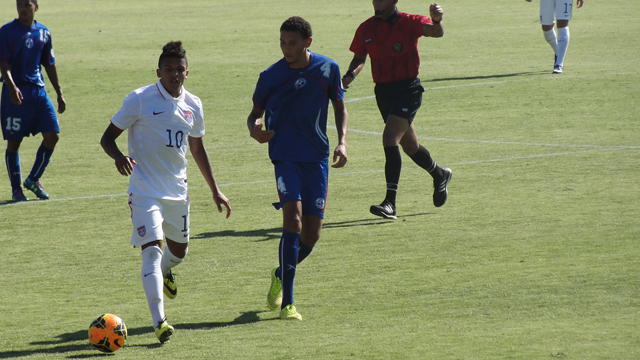 CARSON, California – The U.S. U20 Men’s National Team took control of the 2014 NTC Invitational on Wednesday with a 4-0 win over Bermuda. Australia defeated Chile 5-4 earlier in the day in a wild affair.

While both the U.S. and Australia have six points after two games, the U.S. holds the top spot due to a better goal differential, +5 over +4. A win or a draw against the Young Socceroos on Friday at 7 p.m. at the StubHub Center would give the NTC championship to Tab Ramos and his squad.

Wednesday’s play was heavy on the attack as Australia and Chile exchanged barbs for 90 minutes in a back-and-forth encounter. The U.S. dominated Bermuda from the opening whistle and cruised to the easy win.

“The team obviously created quite a few chances, and we were a little disappointed that we couldn’t get a couple more goals,” U.S. U20 MNT head coach Tab Ramos said after the game. “We wanted to be hungry and put chances away because when you play the more important teams, you don’t get as many chances and you need to put them away. I thought we should have scored a few more goals.”

It was a matter of when, not if for U.S.’s opening goal. The youth national team took control of the game in the opening seconds against Bermuda and never relinquished.

Reading FC forward Andrija Novakovich earned the honor as the first goal scorer when he tapped in a shot from 3 yards out after 27 minutes. Romain Gall started the play with a driven ball to the left channel for defender Caleb Smith.

Smith broke free and hit a cross to the far post that eluded the defenders and the goalkeeper. Novakovich made quick work of it with an easy finish.

The U.S. doubled the lead 12 minutes later when Novakovich turned his mark at the top of the 18-yard box. The Bermuda defender grabbed Novakovich and tugged him to the group. The referee pointed to the spot for a penalty kick.

Zach Pfeffer grabbed the ball and converted the pk for his second goal of the tournament.

Tommy Thompson, who only arrived in camp on Tuesday, scored the third goal on a beautiful individual move. The San Jose Earthquakes Homegrown player shimmied in front of his defender 18 yards from goal and then pushed the ball to his right foot. With just a step of space, Thompson quickly unleashed a rocket of a shot that scorched the upper corner of the net.

It was a completely one-sided opening half as U.S. entered the break with a 17-0 shots advantage. Goalkeeper Zack Steffen’s only action came in 16th minute when Bermuda caught U.S. on the counterattack with a long ball to the target forward. Steffen came off his line to intercept the touch of the target forward.

The U.S. continued to push for the fourth goal in the second half, but breaking through after the break proved to be more difficult than in the first half. It wasn’t until the 86th minute that the U.S. struck the golden goal that propelled the squad into the top spot heading into Friday.

Substitute Russell Canouse floated a corner kick to the far post that a Bermuda defender knocked into his own net.

Chile had the possession, Australia had the counterpunch. The Young Socceroos scored in the 16th minute when Marc Marino broke free and snuck one past the Chile goalkeeper.

Australia doubled its lead in the 38th minute when Devante Clut finished off a pass from Jaushua Sotorio.

Chile continued to roll in the second half with Bryan Cavallo heading home a goal just four minutes after the break. Christopher Diaz made it 4-2 in Chile’s favor with a goal in the 71st minute.

However, Awer Mabil’s introduction off the bench changed the game. Mabil scored twice in three minutes to pull Australia back on level terms. Mabil’s first goal came on a magnificent free kick from 25 yards out. His second goal came from a beautiful 1-2 combination with Brandon Borrello. Mabil has shown he is a clinical finisher at the NTC Invitation with four goals in two games.