The second week of the men's college soccer season was full of surprises, as some of the top teams went tumbling down including the shocking 3-0 loss at home from UCLA against Cal Poly on Thursday. 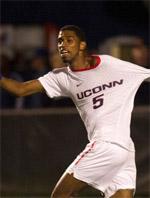 There was one consistent in the rankings though with the Huskies of Connecticut (2-0-0) keeping the top spot after another shutout victory. Connecticut star goalkeeper Andre Blake has only made two saves this season as the group in front of him has been dominant in both fixtures.

Creighton (3-0-0), the No. 2 squad, gave up its first goal of the season on Friday, but still rolled to a 3-1 win over Columbia. The Jays head to Virginia this weekend for games against Old Dominion and William & Mary.

North Carolina (2-0-1) also climbs up the rankings after a win over Coastal Carolina last Monday and then a 1-1 draw against Notre Dame on the road to open conference play.

New Mexico (2-0-1) checks in at No. 4 after splitting the weekend on the East Coast. The Lobos played to a draw against VCU on Friday and then topped Georgetown in overtime on Sunday.

Rounding out the top five is California (3-0-0), which defeated San Francisco 1-0 on Thursday in a thrilling clash. The Golden Bears have quickly climbed the rankings after a perfect start to the season.

The biggest climber of the week came from UAB, which jumped from No. 25 to No. 10. The Blazers defeated Indiana on Friday to improve to 3-0-0 on the season. UAB also has a quality road win over VCU on the resume already.

UMBC, St. John’s(m), VCU, and Clemson all jumped into the top 25 for the week after solid results over the past seven days. The ACC program made the most noise with wins over Virginia and Gardner-Webb.