While the U.S. Under 20 Men’s National Team failed at the final hurdle Sunday night against Mexico, it was mission accomplished down in Puebla, Mexico, as the team achieved its primary goal of qualifying for the World Cup.

The immediate future for the players is now focused on returning to club or college duty, but the mid-June kickoff of the World Cup means that it won’t be too long before head coach Tab Ramos begins preparations for the international showcase.

There’s plenty at stake for players on the fringe roster, and because of the summer date of the World Cup, the roster should be primarily, if not completely, comprised of full professionals. Injuries will limit Ramos’ options, with defender Will Packwood and midfielder Marc Pelosi almost certainly unavailable because of horrific leg breaks suffered with their clubs. 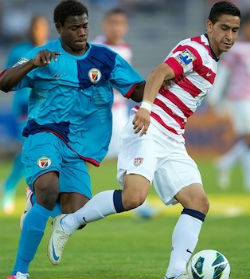 A lot could change over the next few months, but here are TopDrawerSoccer.com’s 21 picks for the U20 World Cup roster, if the competition started next week:

After coming on strong at the end of the U20 CONCACAF Championship, Cropper sealed his status as the No. 1 goalkeeper in this cycle. He wasn’t flawless, but given his experience, there’s no reason to look elsewhere. Bringing on Steffen and Kempin would provide a pair of challengers for Cropper so he isn’t too comfortable.

The biggest differences between the qualifying roster and the U20 World Cup squad could be seen along the back line. O’Neill and Ocegueda are the holdovers here, provided that pro players John Brooks and Adam Henley elect to represent the United States. Brooks is eligible for Germany, while Henley, a right back for Championship side Blackburn, would have to file a one-time switch from Wales in order to play in Turkey. Both players are listed assuming that would happen.

Regarding the rest of the defense, Sean Cunningham would be another enticing prospect, as he could play as both a left back and center back, while former Akron Zip Yedlin provides depth at right back.

Essentially the entire midfield from qualifying should carry over to the World Cup, barring injury and any other negative developments. The biggest change here would happen assuming the addition of more tried-and-true center backs, allowing Stanko to be used in his more comfortable defensive midfield role.

This would potentially provide enough defensive stability for both Gil and Joya to start in midfield, providing a potent offensive punch during the World Cup. Trapp, Lopez and Serna would all be positive depth guys who could come in and make an impact off the bench.

Not a lot of changes need to be made up front, although perhaps the most pressing need for the U.S. attack is a true No. 9, someone who can hold the ball up and combine. McBean would be able to provide that, and another candidate who could easily win a spot with a strong first half in MLS is Omar Salgado. Brandon Allen, the striker from Georgetown, will have his work cut out to make the squad given his collegiate status.

Look for Cuevas, Villarreal, and perhaps to a slightly lesser extent, Rodriguez, to probably do a lot of the heavy lifting in the final third, as their ability to play essentially anywhere in a front three, and interchange seamlessly, to provide a lot of problems to opposing defenses. Danny Garcia retains his spot after finishing strong in the qualifying effort.