The U.S. U20 Men’s National Team opened up their World Cup qualifying campaign on Monday with a 2-1 win over Haiti in the opening fixture form the 2013 CONCACAF Championship in Puebla, Mexico.

U.S. grabbed the early lead when Santos Laguna winger Daniel Cuevas torched the Haiti defense with his speed before being chopped down in the box for a pentaly kick to the boys in stripes. Real Salt Lake midfielder Luis Gil converted the shot from the spot for the opener. 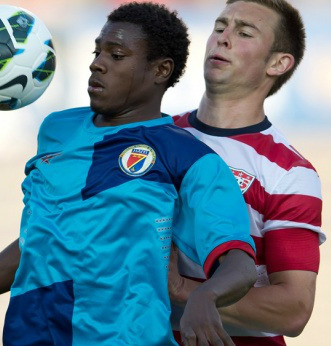 Cuevas doubled the lead in the 26th minute when he got on the end of a cross from Mario Rodriguez. The left-footed winger smashed his shot in the upper corner for the second of the game.

Throughout the opening game, the U.S. had some nervous moments defending and would eventually be punished for the poor organization across the back. Right back Boyd Okwuonu was exposed in the bright lights when the underdog hit the back of the net.

Augusmat Wilberne dribbled through Okwuonu’s legs before he struck a shot that tucked inside the far post. Goalkeeper Cody Cropper put a hand on it, but was unable to keep it out.

U.S. held on late against the onslaught of pressure from Haiti. The U.S. play again on Friday against Costa Rica in the second game from group play.

GK Cody Cropper, 6 – Perhaps he could have done better on the goal, but it is hard to knock him entirely for it. His distribution was not ideal, as Haiti was plenty eager to contend for his bombing kicks forward. Ended the game with four saves.

D Boyd Okwuonu, 3 – He was torched on the goal, but that was not the only time that Haiti picked on the center back turned right back. The North Carolina defender was on his heels all game, as the Haiti attack ran at him at will.

D Caleb Stanko, 5 – Stanko made a couple of timely interceptions, which slowed down the Haiti attack at time, but he should have done better over the course of the game in settling down his squad. The SC Freiburg youngster did not seem entirely comfortable in his role.

D Shane O'Neill, 5 – His backheel in the first half probably prevented a goal, but like his partner at center back, O’Neill should have done better in slowing down the attack of those in blue.

D Javan Torre, 3.5 – Torre may have eluded the hook in this game, as Haiti seemed content in exploiting the other side of the weak U.S. defense, but it still was not a good showing for the UCLA freshman. He struggled to hold possession and offered little going forward.

MF Benji Joya, 4 – Very quiet game for the Santos Laguna midfielder. Joya seemed out of sorts at times, and then he struggled to link up with his teammates when he did get ahold of the ball. The lack of control from the midfield allowed Haiti to control the game and turn it into a track meet at times.

MF Wil Trapp, 3.5 – The Columbus Crew recent signing was invisible for the most part. He did not seem to want to grab ball and take over the game, which is exactly what the U.S. needed from one of its midfielders. Also, the lack of pressure on the ball in the midfield allowed the opposition plenty of opportunities in this fixture.

MF Luis Gil, 5 – The Real Salt Lake youngster scored the opener, but he should have had at least two other goals. Gil missed an open header in the opening stages of the game, and later shanked a shot from eight yards out. Either finish likely would’ve have been the contest to bed in the opening half.

F Jose Villarreal, 5 – The LA Galaxy winger had a couple of decent services on set pieces, but did not have much from the run of play.

F Mario Rodriguez, 4 – Deserves the credit for the assist on the game-winning goal, but was at a loss during the rest of the game. He was all over the field in the second half, and hardly helping at any position.

F Daniel Cuevas, 7 – The only player who showed well for the U.S. Cuevas was the main reason that Ramos and his coaching staff walked away with three points. The speedy winger looks to be a promising prospect for the future.

MF Mikey Lopez, 5 – Like the other midfielders who had a go in this contest, Lopez had a couple of good moments, but there was never a moment when he slowed down the game and took control of the proceedings. However, given the performances of those around him, he may get another shot to show his quality against Costa Rica.

F Jerome Kiesewetter, 5 – Brought on as a winger, the German-American did not do much beside pick up a yellow card for wasting time.

D Juan Pablo Ocegueda, N/R – Only had a couple of minutes at the very end of the contest.