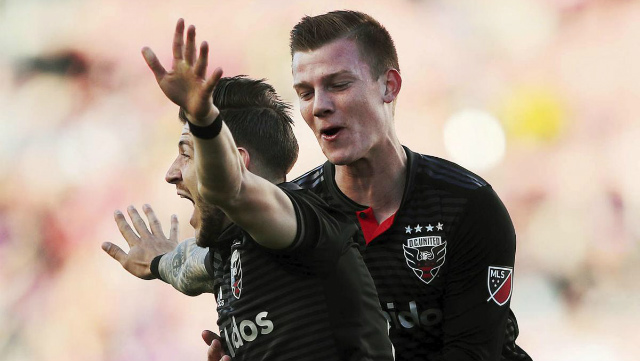 Wayne Rooney is the name dominating the headlines for D.C. United these days.

The 32-year-old forward/midfielder appears poised to join the MLS franchise in the coming weeks, as the side badly needs a lift heading into its new stadium in July. After a 3-2 loss to Real Salt Lake this weekend, United is 1-5-2, with five points from its first eight matches.

But despite the team’s struggles on the field, the team’s youngest player turned in his best performance of the season in the most recent defeat. U.S. youth international Chris Durkin played arguably the best shift of his young pro career, impressing despite the team's loss.

Deployed in his usual No. 6 role, Durkin made his fourth start in MLS this season. It was perhaps the most difficult challenge yet, as his side went down a man in the 23rd minute when left back Joseph Mora received a straight red card for raking his studs on Jefferson Savarino’s Achilles.

That left Durkin with little to do but defend for long stretches of that match. And those bear out in the images below. Durkin had 11 recoveries, three interceptions, won four tackles and had two blocks (shown in the graphic on the right). His passing display against RSL shows that he’s steady with possession, ticking things over, while also unafraid to be ambitious with a wide range. Often lauded for his passing ability and comfort with possession, being under pressure presented a significant test for the 18-year-old. Durkin answered them time-and-time again, and despite being down a man, D.C. was able to muster a few nice moments with his passing ability. He showed the willingness to go into a challenge, but more impressively, read the game well to snuff out chances before they became more dangerous.

Of course, Durkin’s great performance came in a defeat, something that any player wants to avoid. And he’s had the ups-and-downs one would expect from a teenager playing such a difficult role. In the previous league match on April 28, Durkin failed to cut out a ball in the box that ended up in the back of the net in a 3-2 loss against the Philadelphia Union.

Still, a player capable of putting together highlight-reel passing display is a prospect to keep tabs on. That he continues to see minutes for D.C. United is a good thing.

something tells me DC United are going to struggle to hold onto Chris Durkin pic.twitter.com/SaXWMyfHI3

Durkin’s shift wasn’t the only notable one from a young American in Sandy, as Paul Arriola opened the scoring for the visitors. Despite playing down a man, Arriola put in a quality effort in central midfield, harrying and harassing RSL throughout 90 minutes.

On the other side of this matchup, Real Salt Lake continued its role as chart-toppers in the #PlayYourKids race. While Justen Glad and Brooks Lennon were expected to see significant minutes in this campaign, rookie Corey Baird started, played 90 minutes and scored his third goal in eight games. It was a brave finish, and reminiscent of why Baird was such an effective player for Stanford during his four seasons at Palo Alto.

Few teams in the U.S. Soccer landscape have been as aggressive about signing and playing teenagers on its USL team quite like the Seattle Sounders.

Seattle Academy standout Marlon Vargas became the latest youngster to join Seattle Sounders 2, signing with the club on Friday. Vargas slotted straight into the S2 starting lineup, playing 55 minutes in a 1-0 loss against Pac Northwest rivals Portland Timbers 2 on May 12.

It was a muted debut in all for Vargas. He missed a golden chance to put S2 in front in the 34th minute, driving into space at the top of the box and just not connecting to get the shot on frame.

His passing was simple and safe for the most part, though he did have one key pass, completing 15 of his 20 passes in his shift. Vargas is no doubt an exciting player, even if his first professional outing didn’t come with the big splash of a goal. Former U.S. youth international Eryk Williamson, who started and played for T2, accounted for the game winning goal in stoppage time to spoil Vargas’ debut and win it for the visitors.

Vargas’ signing comes as no surprise; few players have impressed in both the Development Academy and Generation adidas Cup. Competing mostly with Seattle’s U17s, the California native has 19 goals and 26 assists playing as either a No. 10 or on the wing at the Academy level. Of course, making that translate into the weekly grind of the professional level is another significant challenge.

But when it comes to youngsters trying to climb the ladder from the Seattle Academy to S2, Vargas won’t be alone. Other players like Azriel Gonzalez (16), Ray Serrano (15 at time of signing) and Alfonso Ocampo-Chavez (16) have recently joined the club at younger ages.

It will be several years before those decisions are vindicated for players or clubs to sign so early, though the environment is there in Seattle to give them a much better chance than even a few years ago.