VCU enjoying life in the Atlantic 10 A change of conference on short notice could have thrown the entire VCU soccer season off the rails.

The program, which been steadily on the rise in each of head coach Dave Giffard’s last two seasons in charge, instead responded in a positive fashion after making a late move from the CAA to Atlantic 10 in June 2012.

Through four of its nine games in the new conference, the Rams have posted a pretty strong 3-1-0 record.

“So far, so good,” Giffard told TopDrawerSoccer.com. “I think the A10 and the schedule presents some interesting challenges, certainly with the Friday-Sunday format with travel partners and the away part of that.” 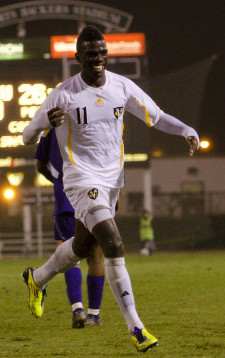 “That was certainly challenging and it presents some different pieces that are unique with the league. But so far, so good.”

VCU’s welcome to the Atlantic 10 came on October 5, against none other than last year’s national title runners up Charlotte. Instead of being intimidated by the experienced 49ers, the Rams responded with an impressive 4-1 victory at home. Since then, a tough 3-2 loss against Saint Louis came sandwiched between wins against George Washington and Butler.

“It’s a fun time,” Giffard said. “For us it’s a new challenge going into the A10 and certainly going on the road. We didn’t play great on Friday in Saint Louis, but we played well enough that we thought we had done enough things to win.”

The loss against the Billikens on Oct. 12 came in particularly heartbreaking fashion. Ahead 2-1 with seconds left, the Rams conceded off a set piece with six seconds to go, before ultimately losing the game in overtime.

It wasn’t the first cruel overtime loss of the season, however, as VCU earlier carried the run of play against in state rivals Virginia. But after failing to find the back of the net in regulation, the Rams conceded in overtime to lose that game 1-0.

But Giffard was far from despondent over the recent conference loss, as he sees it as a positive for the final run of the season, not to mention how it helps the Rams forge new rivalries with in the new conference.

“It was a good game, and certainly that’s a team and a program that we’ll be seeing a lot of, I would imagine, hopefully this year later on,” he said. “Certainly moving into the future, that’s one of the opponents we’ll have a nice rivalry with.”

The team did well to bounce back the Sunday following the loss to Saint Louis, sneaking out a 1-0 win over Butler.

Another tricky Atlantic 10 road test is on the slate for this weekend as well, with trips to Fordham on Friday, followed up by a visit to La Salle the following Sunday. To get the most out of those games, VCU must rely on the players who have got them to this point.

Forward Jason Johnson has enjoyed a strong season, scoring 9 goals in 12 games, while freshman Devon Fisher has played well next to him up front, chipping in 5 tallies. Freshman defender Dennis Castillo has also stepped in and contributed in his first season, while Juan Monge Solano and Mario Meraz have been solid and steady.

While succeeding the final stretch, and securing a top eight regular season finish to make the A10 tournament is the smaller picture, VCU also has loftier goals in mind.

“We talk a lot about our long-term goals and where we’re taking this program and each year, we’ve taken a step,” Giffard said. “The first year, we took a big step from being in the bottom 40 or 50 in the RPI when we got here and finishing second in the league we were in, the CAA, and putting ourselves in a position where we were competing to win our way into the tournament. Last year we took another step from there and jumped back into the top 25 with an early start, but had some things that I think were evident and present within our team that came up. We lost a few more games than we felt like we ought to have, but that was a step in our process.

“This year the guys have come back and had a very good offseason, good spring, built a lot of confidence, and we’ve got a lot of players who are maturing and improving individually and as a group. I think our performance this season has shown that.”

There are still games to be won in the here and now, of course. And Giffard has his road map planned out, hoping to see his team continue to grow and thrive in a new conference background.

Every team’s approach is a little different,” he said. “For us, the things that are really important this time of year is us really performing well and doing well with the things that we are and what we try to do – and that’s just be a little sharper in possession, a little more dangerous in the final third. Just the little details here and there.”