Virginia women rally to hold serve at No. 1 After winning the first seven games of 2013, the lone knock on No. 1 Virginia's credentials was the fact the squad had yet to play a game on the road. This weekend, the Cavaliers left Charlottesville, trailed in two games, but emerged with two more victories in ACC play. 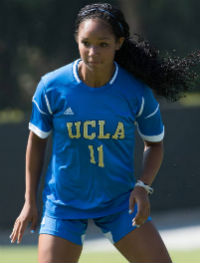 On Thursday, Makenzy Doniak and Molly Menchel scored second half goals to rally the Cavaliers to a 2-1 win over Boston College. Visting Pittsburgh on Sunday, the script was all too similar: Dana DelleFamine bagged the opener in the 12th minute to give Pitt the lead. But once again, Virginia responded, and it was Doniak to the rescue. After Morgan Brian's 27th minute equalizer, Doniak was in the right place at the right time to give UVA the lead in the 57th minute. Five minutes later, the California native put the game out of reach with a second goal on the afternoon. The Cavaliers, who outshout the Panthers 37-3, remain 9-0-0 on the season and hold on to the TDS top spot.

Late game dramatics kept Stanford at No. 2. Trailing on the road against Santa Clara 2-1, a late penalty kick by Courtney Verloo secured overtime, and the forward stepped up in the second extra stanza, picking up her hat trick and a 3-2 win for the Cardinal on Sunday.

There was a shakeup in the top ten, as North Carolina's 1-0 loss at the hands of Florida State last Wednesday saw the Tar Heels drop to the No. 6 in the rankings. Despite the mid-week hiccup, the Tar Heels rebounded nicely on Sunday, defeating Miami (FL) 4-0 behind a Crystal Dunn hat trick.

Outside of that, it was business as usual for many of the nation's top teams. UCLA moved up to the No. 3 spot after a dominating weekend, beating Pepperdine 2-0 on Friday evening, and then securing a 3-0 win over Loyola Marymount. Freshman forward Darian Jenkins played a big role in the success, scoring two goals and adding an assist in that stretch.

The No. 4 Seminoles wrapped up the week with another ACC win, defeating NC State 1-0 on the back of a Marta Bakowska-Mathews goal in the 87th minute. Florida State's defense continues to look impressive in 2013.

Slotting in at No. 5 is Notre Dame. The Fighting Irish, who knocked off North Carolina on Sept. 15, won its lone game of the week last Thursday in dramatic circumstances. Unable to break down a tough and determined Syracuse side, defender Sammy Scofield headed home the winner after a tremendous Morgan Andrews free kick with one second left on the clock.

Rounding out the rest of the top ten is North Carolina, Penn State, Georgetown, Florida and Wake Forest.

The new program to jump into the top 25 is Virginia Tech. The Hokies took to the road and secure a pair of impressive victories, defeating No. 17 Maryland 2-0 on Thursday in College Park, and wrapped up the impressive four-day stretch with a 1-0 win over Boston College on Sunday. Katie Yensen's goal in the second minute stood up as the winner up in Massachusetts.

The full rankings can be seen here.