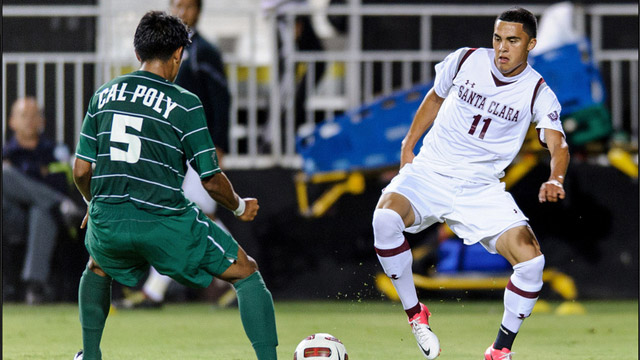 The West Coast Conference has been a couple of bounces of the ball away from sending a team to the College Cup the last two seasons. Both came as a huge surprise in November.

Saint Mary's (CA)(m) first had a dream run in 2011 when they won three games on the road before dropping a 2-0 result to eventual National Champions North Carolina. San Diego duplicated the Cinderella run this past fall with road wins over Cal State Northridge(m), UCLA, and Tulsa before losing to Georgetown.

Both teams entered the postseason without a seed, which made the deep runs even more impressive and shocking.

The link between the two stems from the experienced rosters of the WCC programs. The Gaels and the Toreros leaned on senior leadership to sweep through November and reach the doorstep of College.

Will this fall be different? Will WCC continue to carry the flag for West Coast programs in the postseason?

After going winless in conference play last season, the Zags are counting on some senior leadership to lead them out of the cellar in the WCC. Head coach Einar Thorarinsson has seven seniors on the roster including starting goalkeeper Ryan Caballero and longtime starting midfielder Nick Hamer. Clark Phillips, the leading scorer from last year’s squad with five goals and the 2011 WCC Freshman of the Year, is back for his junior campaign.

The Zags will need every player in top form to stay competitive in the WCC this season.

The Lions were competitive in 2012 despite what the record may reflect. Seven of LMU’s ten losses on the year were by a single goal difference. Reversing those fortunes in 2013 will be tricky though. The Lions still do not have a forward with a poacher’s mentality.

Freshman ace Pedro Velazquez led the team in scoring with six goals last season. The former Chivas USA and LA Galaxy academy player is a talented winger who will be one to watch again this fall.

Senior Christian Alvarado spent some of his summer training with the Galaxy U23 squad where he played outside back. The forward in college looked like an intriguing option at defense for the next level.

Midfield standout Steven Evans left the program early to sign a Homegrown contract with the Portland Timbers in the offseason. Evans was the proverbial favorite to win the 2013 WCC Player of the Year title.

This Pilots roster lacks any excitement with Evans exit. Derek Boggs has developed into a fine player, and Jaime Velasco showed well in his first season in college. However, there is a big question about who can break down the opposing defenses with no Evans.

It is not the same Toreros team that guided through the NCAA Tournament’s first three rounds last season. There are 16 new players on the roster – an impressive haul of fresh faces.

For MLS draft scouts, Elijah Galbraith-Knapp is the player to watch from the small percentage of returners on the roster.

On paper, San Francisco has the roster that seems the most likely to pull off the huge shock and win the league. Mauricio Diaz De Leon is arguably the most talented midfielder in the conference. If Liam Kelly puts it together, he could be the best forward in the conference.

Defense is the big unknown, but an opening clash against LIU-Brooklyn is a nice way to slowly ease into the season.

The Gaels consistently put out a team that will pressure high and make life difficult for the opposition. The style of play is conducive to postseason success, but with only one bid, typically, award to the WCC, the real challenge is getting there.

Gaels do not have any real standouts from the group on this season’s roster. Incoming freshman Alex Braman did well with the Colorado Rapids Academy in the past, and should contribute in his debut season.

The Broncos have a young roster this fall with sophomores and freshmen expected to be the major contributors. U.S. U20 Men’s National Team goalkeeper Kendall McIntosh is the favorite to take over the goal following Larry Jackson’s departure.

The sophomore is hoping to erase the memory of his lone collegiate start where he let in five goals.

Fellow sophomores Max Ornstil, Ryan Marsch, and Jared Hegardt are looking to build off positive first seasons with the Broncos. The freshmen class also looks to hav a few immediate contributors from the group.

The real question for the Broncos is how they plan to replace the productivity of Erik Hurtado, who was easily the most dangerous weapon in the attack for the squad.

In January, the WAC announced that it would be add men’s soccer to the roster. Eight programs found a new home in the conference for 2013.

The Falcons only return three starters from last year’s team that made the NCAA Tournament. Lost to graduation was star midfielder Kevin Durr, who had a stellar career with Air Force.

The trio of returners should help make up the spine of the team with Brian Klazura (forward), Scott McGillivray (midfield), and Caleb Downey (defense) all holding pretty clear roles.

The preseason opener against New Mexico went relatively well with a 2-0 victory. Coach Doug Hill highlighted the defensive cohesion against a very good Lobos side. Freshman Blake Elder recorded his first goal in college in the exhibition win.

Replacing Gyasi Zardes is the challenge for the Roadrunners, but not something the coaching staff is focused on. Zardes was a special talent that does not come around regularly, so building the team to highlight the strengths of this year’s roster is the new challenge.

Not eligible for the postseason until 2017 due to making the transition to Division I, Grand Canyon is still in the initial stages of building the program for this stage after quite a bit of success at the Division II level.

By all accounts, head coach Petar Draksin can recruit, and now he is gunning for the best players coming out of Arizona.

The conversation about the HBU Huskies will start and end with Kristopher Tyrpak. The 2013 USL Premier Development League Player of the Year has received about as much attention as a gluten-free product at Walmart. Hidden in an obscure conference on a struggling team, Tyrpak has not generated much buzz.

Frankly, his numbers do not pop off the page either with only 13 goals and 13 assists in three seasons. However, Tyrpak dominated the PDL this summer with the Austin Aztex and that’s enough to make most scouts curious.

This fall will be his final hurrah with HBU, which was picked to finish last in the conference. Typak’s professional aspirations have little to do with his club’s success this season, but leaving on a wining note would be a huge plus.

The coaches of the WAC selected Sporting Kansas City Academy alum Jordan Rideout as the preseason Player of the Year. The honor means nothing when the ball finally starts moving later this week, but it does show the respect that the striker commands from opposing defenses. After scoring seven goals as a sophomore last year, the pressure is on Rideout to break double figures this fall.

The Kangaroos also need to solidify the defense, which let in 30 goals in 19 games last season.

The Spartans enter the 2013 season without a senior on the roster. Of the six juniors on the squad, only one started his collegiate career with San Jose. The point that this is building to is the Spartans have had trouble keeping players. They recruit decent talent, but it doesn’t develop into a core group to build around for years to come.

Peter Fewing is in his second season back in charge of Seattle this fall. His return campaign did not go as planned, but the Redhawks are building toward the future with a young core. Sophomores Austin Sweeney and Ian Hines-Ike are the players to watch this season.

There is one undeniable fact about the Rebels: they are exciting.

The Rebels scored 33 goals in 2012, but also let in 54 goals. The offense should only get better in 2013 with Salvador Bernal getting more freedom to lead the attack in his junior season.

Shoring up the defense is another question. If the Rebels can slow down the opposition attack, UNLV could make some noise in the WAC.