Like a handful of other top women’s college programs across the country, Wake Forest is adjusting to life without one of its best players at the start of the season because of the U20 Women’s World Cup.

Forward and reigning ACC Offensive Player of the Year Katie Stengel is with the team in Japan, and coping with her absence over the first few weeks of the season is one of the biggest challenges the team faces.

It’s created a firm goal for the team to achieve during the opening stretches of the year. 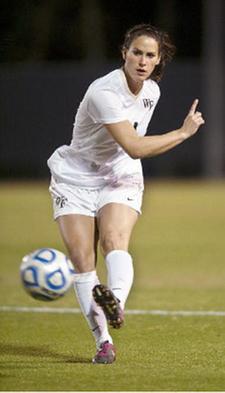 Rachel Nuzzolese will have to step up.

“The most important thing is that we try to generate more chances and find people who are going to score,” head coach Tony da Luz told TopDrawerSoccer.com. “We’ve got to look to be more dangerous, having the luxury of having Stengel can really change the game for you and break people down, draw a lot of players. Without her, we have to be a little more savvy and have a bit more of a group effort to score goals and finish the chances that we do create.”

It was mixed results for the Demon Deacons over the first weekend of action, as the team went unbeaten in a pair of games, winning 4-1 against Richmond and drawing 0-0 against UNC Wilmington.

Da Luz was pleased with how things progressed in the opening stretch regardless of the results.

“We’ve played well in the two games last weekend,” he said. “We actually played ten times better on Sunday against Wilmington than we did Friday against Richmond, but we didn’t finish our chances.”

Rachel Nuzzolese, a senior forward and second-leading scorer behind Stengel in 2011, scored against Richmond and will be one of the players counted on to step up. Kristen Meier, typically a midfielder, has impressed in a forward role as well.

But the numbers don’t lie about what the absence of Stengel means for Wake. Last season, she scored 19 goals and added 8 assists. That means she was involved in more than half of the team’s goals (27 out of the total 53 scored) during last season’s run.

Knowing that Stengel would miss time, da Luz looked to address that by encouraging players to be more assertive in the offensive third and try and take the initiative to make things happen.

“In training, just emphasizing when you’re getting into one on one situations, the kids have to take responsibility and be dangerous,” he said. “Instead of playing sideways or deferring to somebody else, they’ve got to be willing to take players on and try to create some dangerous situations. That goes across the board, not just the forwards, but the team, and the attacking personalities and the outside backs.”

Stengel’s return is not yet known, as it depends on how far the U.S. U20 WNT progresses in the World Cup. If the team makes it all the way to the final, scheduled for September 9, she would come back just in time for the start of the ACC season, which begins on September 13 against Miami (FL).

There is hope that these first few weeks without her could make the team more dangerous overall as they become an even more well rounded squad.

“We’ve emphasized set pieces even more, executing on those, so that’s going to help when Katie gets back as well, because she draws fouls,” da Luz said. “I think it’s good for us to really adapt to [her absence] and do it more collectively.”

And once ACC time comes around – and Stengel re-enters the fold – da Luz has a firm idea of where he wants this team to be as they try and make another run at a College Cup appearance.

“We want to know what our core is, 15, 16 players, good core, established rhythm and good rotation of substitutions,” he said. “And to know that we’re competing every day and playing hard, because I think the ACC is going to be much more wide open than these games have been, where we’re playing against some pretty defensive approaches right now.”