Washington trip to Sweden precursor to 2014 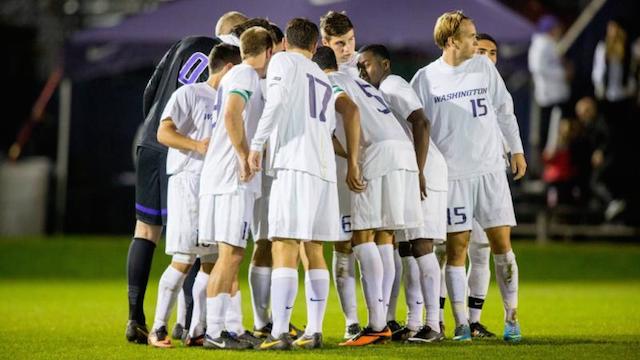 Late last month, the Washington men’s soccer team was halfway through its preseason tour of Scandinavia when it journeyed about 60 miles south of Stockholm to face a lower division Swedish side in a friendly. The Huskies had a small world moment when they got to the stadium; the team they played included recently graduated Marquette midfielder Bryan Ciesiulka.

Before the game, Ciesiulka did his best to warn his teammates that the Huskies were talented.

“They were all like, ‘Nah, we don’t think so,’” said sophomore midfielder Cristian Roldan. “You just want to make them believe that Americans can play too.”

That wasn’t the trip’s only directive, but the Huskies certainly accomplished that feat in spades. They went 4-1 on the trip, including a 3-0 win over that group of Nykoping reserves that included Ciesiulka. The five matches ran the gamut between a laughably easy win over a small club that didn’t push out its first team, and a game in a pro stadium against a first team side coached by Swedish legend Henrik Larsson.

“Individually and collectively, it’s a learning experience,” said Clark, who took the idea from a similar trip he joined with Notre Dame four years ago. “We have short preseasons, so hopefully we worked out some kinks and learned some things, because you couldn’t play like we did in the first game and drop an opening game of the season, so you realize how quickly you’ve got to get going.”

The team flew into Copenhagen in late June and set up a five-day camp in Trelleborg, a town just south of Malmo, before losing 2-1 to the FC Rosengard reserves in Malmo in the team’s poorest performance of the trip. It only got better. Washington followed that with a 10-3 rout with its second unit over a lower division side, which Clark called “a ridiculous game.” But that preceded Washington’s best game of the trip, a 2-1 win over a Falkenberg first team presided over by Larsson.

“It was the exact game we were hoping for,” Clark said. “They opened the stands. It had a little bit of an atmosphere to it.”

The Huskies rounded out the trip with a stint in Stockholm, where they beat Ciesiulka’s Nykoping side before finishing with a 2-1 win over a Bromma U19 team that won the U19 non-Super Group championship at the Dallas Cup in 2013 and competed again this year.

There was some good and bad about the trip, but Clark thought it was ample preparation for a coming season of promise.

The Huskies figure to be a team to fear this fall. Among others, Roldan returns as arguably the nation’s most dangerous midfielder, Darwin Jones should continue terrorizing back lines up top and top keeper Spencer Richey is back to full strength after breaking his leg in the fifth game of last season. In the offseason, Roldan turned down a Generation adidas contract, Jones rebuffed a Sounders Homegrown offer and Richey was forced to turn away an invite to the MLS Combine. With a talented cast around them, the Huskies boast three players who could have well been professionals already.

In three seasons at the rudder, Clark’s guided Washington to a 42-11-9 mark, including their first Pac-12 title in history last season and a second overall seed in the NCAA tournament. While they’ll have to overcome hurdles in their own conference to repeat, namely UCLA and Hermann Trophy frontrunner Leo Stolz, it’s hardly a stretch to call the Huskies national title contenders in 2014.

With that in mind, the team hopes its trip to Scandinavia was only the beginning of a long, fruitful campaign this fall.

“As a team, you want to grow together,” Roldan said. “The more you play together, it just helps. You want to find out tendencies that you wouldn’t find out until the season with some of your players. I thought this European trip was good for that. I thought towards the end we started playing a lot better than in the beginning, and I think that shows.”