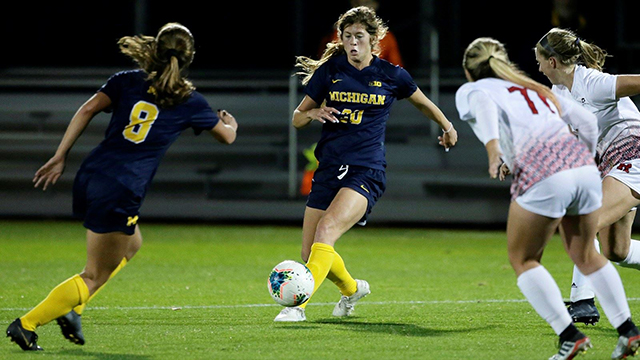 It’s the final weekend of play in the women’s Division I soccer season before the NCAA tournament begins.

Conference semifinals (and finals) highlight the action this weekend. Below is a preview of some of the action to track from Friday through Sunday.

One of the country’s most competitive conferences, a quartet of dangerous teams descend on Cary to compete for the ACC tournament championship. There’s a plausible scenario that could see FSU, Virginia and North Carolina as three of the four No. 1 seeds in the NCAA tournament. At least two of the three are locks, at least per the RPI, so that adds incentives for that trio. Both semifinals are rematches of 1-0 regular season wins, with Virginia edging FSU in Tallahassee, and the Tar Heels holding off their in-state rivals NC State. An X-Factor for the weekend is Tziarra King. If the dynamic senior can rise to the occasion against UNC’s strong back line, it raises the chances of an upset. Tracking North Carolina’s approach will be interesting, as they’ve relied on using their entire bench, being hard to beat on set pieces and looking to win games that way.

The Big Ten descends on Rutgers, which is set to host this year’s semifinals and final. It’s as wide-open as they come, with top seed Wisconsin out of the mix, and Purdue the lone team playing for an NCAA tournament spot. Despite battling through significant injuries, Penn State has found its groove of late, winning seven straight games. Life on the road has been kind as well, with a 7-1-1 record outside of State College. Purdue played them close during the regular season, losing 2-1 to the Nittany Lions in Indiana.

Host side Rutgers will like their chances as well. But a semifinal clash against a talented Michigan team, anchored by Sarah Stratigakis and Alia Martin. There’s also the battle of two talented goalkeepers, whether it’s Wolverine Hillary Beall or Rutgers’ standout sophomore Meagan McClelland. In the regular season meeting, Rutgers got the better of Michigan in Ann Arbor, and on home turf, will look to pull off the same result.

Watching the Big 12 semifinals this weekend and into the NCAA tournament is going to be fascinating to see how much noise any of the league’s programs can create. Texas Tech looks primed to cause an upset or two, boasting Kirsten Davis up front with stellar freshman Madison White in goal. But they’ll look to lock up a tournament seed and come away with a Big 12 tournament crown in a very competitive field. TCU can’t be slept on, and need to pick up the automatic bid in order to secure a spot in the NCAA tournament field. With Messiah Bright and Yazmeen Ryan can cause trouble though, and will give the Red Raiders everything they have.

The other side of the bracket is another top matchup for the weekend. While Oklahoma State will miss Grace Yochum, Kim Rodriguez, Jaci Jones and Olyvia Dowell can certainly pick up the slack. Kansas has quality of their own, whether it’s Big 12 Defensive Player of the Year Adisyn Merrick at the back or Katie McClure jump-starting the attack.

Seeding on the line as USC, UCLA battle in LA

One of the marquee matchups of the weekend (Nov. 8, 9 p.m. – Pac-12 Networks) doesn’t have substantial postseason impact in the sense that either USC or UCLA could miss the NCAA tournament. And with Stanford already at the Pac-12 summit, a regular season crown isn’t on the line. But it is a battle for second place in the Pac-12, with the winner edging ahead of the loser for that honor. It could potentially mean a No. 1 seed for the winning side as well, although that is far from a guarantee. The battle is an intriguing one, between two sides that will hold aspirations as under-the-radar national title contender. A shoot out could be possible as well, with the firepower of Ashley Sanchez and Jessie Fleming capable of putting pressure on the USC back line. On the flip side, the duo of Penelope Hocking and Tara McKeown have scored a combined 25 of the team’s 35 goals. Dealing with them is going to be a focal point for the UCLA defense. No matter what happens, this matchup provides a competitive, final tune up ahead of the NCAA tournament.