The #4 UCLA Bruins took another step toward a top four seed in the NCAA Tournament and to back-to-back Pac-12 titles on Monday with a 1-0 road win over #18 Washington.

Senior Ryan Hollingshead scored the lone goal in the game in the first half and goalkeeper Earl Edwards was only required to make one save in the Bruins’ final road game of the regular season. 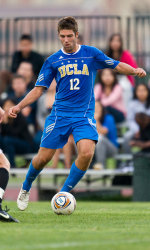 The Bruins are undefeated in their last 17 road games overall and carrying a 14-game winning streak on the road in Pac-12 games into next season.

If UCLA wins out, the Bruins are likely looking at a top four seed, which means the path back to College Cup goes through Drake Stadium.

Despite the loss, Washington still holds the top spot in the conference. UCLA needs six points from the final three games to bypass the Huskies and take the title. UCLA is back on the field on Thursday against Stanford, which beat UC Santa Barbara 1-0 on Friday.

After starting the season 2-6-0, postseason aspirations for the San Diego Toreros looked bleak. However, conference play is where the action actually matters and San Diego has rattled off seven wins in a row to move into sole possession of first place in the West Coast Conference.

With no conference tournament in the WCC, San Diego only needs to hold onto the top spot to clinch the automatic berth to the NCAA tournament. That might be easier said than done though.

With four games left, Santa Clara is three points back while Saint Mary’s(m) and Portland trail by five and six points, respectively. The WCC race figures to come down to the final weekend with Santa Clara playing at San Diego on the last day.

With wins over San Jose State and Seattle, New Mexico clinched the top spot in the MPSF Tournament over the weekend. The Lobos were already selected as the host of the tournament before the season.

CSU Bakersfield and Air Force enter the final weekend of the regular season fighting it out for the second seed. Air Force holds the slight one-point advantage going into the games.

Davis and Northridge in control in Big West

Cal State Northridge(m) already clinched the top spot in the Big West South Division, but the Matadors kept rolling on with a 2-1 win over UC Riverside on Saturday. Cal State Fullerton and UC Riverside are battling it out for the other spot. The Titans have a four-point advantage with two games left.

The details of the Big West North Division are a bit more complicated. UC Davis only needs two points from the final two games to claim one spot after defeating the UC Santa Barbara Gauchos on Sunday. Sacramento State and Cal Poly are both in contention for the other spot with a number of outcomes in play.

The Mustangs of SMU defeated Marshall 1-0 over the weekend and secured the top spot in the Conference USA tournament, which will be hosted UAB and begin on November 7.

SMU has enjoyed the addition of Duke transfer Tyler Engel to the roster this season. Engel leads the team in goals (eight) and assists (six) on the campaign.

Tulsa and Kentucky are tied for second in the conference with both teams sitting on 13 points. The Wildcats have a game in hand.