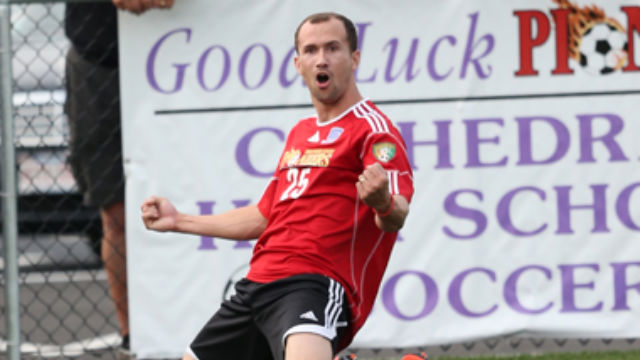 TAMPA, Fla. – The PDL announced its Team of the Week for the eighth week of the season today, with Western Mass Pioneers forward Alencar Junior being honored as the Player of the Week. Junior, a native of Brazil, had five goals in two games as the Pioneers joined the race for the playoffs in the Northeast Division as they reached the midway point of their season.

Junior opened the week on Wednesday night by leading the Pioneers to a 4-1 victory against the Real Boston Rams as he scored the opening goal in the 27th minute to put his side ahead. After Tommaso D’Agostino doubled Western Mass’ lead before halftime, Junior put the game away in the second half as he scored a pair of goals eight minutes apart to complete his hat trick.

Three days later, Junior had both goals in a 2-1 victory against the Vermont Voltage. After Junior gave the Pioneers a 15th-minute lead, Western Mass appeared to be on its way to a draw after Vermont pulled level early in the second half. Junior was able to grab victory for the Pioneers as he scored in the 89th minute. Western Mass now sits three points behind both the GPS Portland Phoenix and the Ottawa Fury, but with a game in hand, as the three teams enter the second half of the PDL season.

Oklahoma City FC goalkeeper Bryan Byars was honored after recording a six-save shutout in his side’s 0-0 draw with the previously perfect Austin Aztex, and he was joined by a trio of defenders led by Virginia Beach’s Shaun Russell, who scored the only goal in the Piranhas’ 1-0 win against the Carolina Dynamo. Thunder Bay’s Axel Sjoberg was also selected after he scored two goals in the Chill’s 5-2 win against Springfield on Saturday night, while Jersey’s Lebo Pila was honored after played a decisive role in the Express’ 2-0 win against the Ocean City Nor’easters.

Michigan’s Matt Walker led a quartet of midfielders honored after he recorded two goals and four assists in the Bucks’ two wins that put them on top of the Great Lakes Division. Ventura County’s Anthony Salciccia was also selected after leading the Fusion to a pair of wins with three goals in two games during the week, while Toronto’s Maxim Kowal was honored after rallying the Lynx with two goals in a 3-2 victory against K-W United. Fresno’s Paul Islas continued his outstanding season, and was selected after helping the Fuego remain undefeated with a 3-1 win against FC Tucson.