Life on the road is never easy, so when players rise up to lead her team to an upset win away from home, it’s worthy of mention.

That’s what TopDrawerSoccer.com player of the week Cheyna Williams (forward, Vanderbilt) managed on Friday and Sunday. After netting a game winning goal against Wisconsin up in Madison, Williams scored a hat trick to help the Commodores to a 4-4 tie on Sunday.

Here’s a look at the rest of the TDS team of the week: 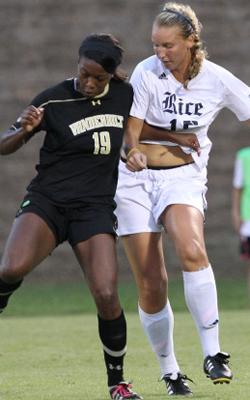 GK Katelyn Rowland, UCLA: While the junior goalkeeper may not have a kept a clean sheet in either game over the weekend, it didn’t mean she had a bad day in goal. Facing North Carolina and Duke in back-to-back matches, Rowland made seven strong saves against the Tar Heels in a 1-0 loss, including a couple of sensational stops against Crystal Dunn. Then on Sunday, the only thing preventing her from a shutout against Duke was a penalty in the last minute of the game, and while Rowland couldn’t stop it, the Bruins did win 2-1 in overtime.

D Christen Westphal, Florida: The defender played all but 14 minutes in two shutout wins over the weekend, as the Gator back line stymied both Oklahoma and Oklahoma State. In two games, the two sides mustered a total of just six shots overall.

D Emily Menges, Georgetown: The Hoyas didn’t concede a goal in two matches last week – a 2-0 win on the road against NC State on Wednesday and a 3-0 home win against Delaware on Sunday. Menges played every minute at the back in both games, leading the team’s defensive effort.

D Allie Sirna, Tennessee: Sirna played the full 180 minutes on the weekend at center back, anchoring the Tennessee back line. Her efforts on defense, which included several clears in the box and disruptions of breakaways, played a major role in Tennessee’s two shutout wins.

MF Jessie Bujouves, Indiana: The sophomore midfielder put in a pair of clutch performances for the Hoosiers, scoring game winning goals against Eastern Michigan and Eastern Kentucky. She also added an assist as the Hoosiers’ record hit 5-0-1, the second best start in program history.

MF Morgan Brian, Virginia: Early season dominance continued for Brian and the Cavaliers. After a mid-week appearance with the full U.S. national team, the midfielder was once again in the middle of success for UVA, scoring three times and notching two assists as the Cavaliers won 6-0 and 3-0 over Rutgers and Seton Hall respectively.

MF Crystal Dunn, North Carolina: Big players rise up for big games, and Dunn showed why she is college soccer’s best player, coming through to score the game winning goal against UCLA on Friday night. Playing both games as an attacking midfielder, Dunn then also tallied in a 4-2 win over West Virginia.

MF Morgan Andrews, Notre Dame: The top rated recruit for the class of 2013 enjoyed a breakout performance on Friday, scoring twice and notching an assist for the Irish in a 4-0 win over Detroit(w).

F Cheyna Williams, Vanderbilt: It was quite the weekend for Williams, as she scored twice against Wisconsin on Friday, leading the Commodores to a 4-3 win on the road. Williams then followed that up with a hat trick in a 4-4 draw against Wisconsin-Milwaukee on Sunday.

F Taylor Uhl, Stanford: Notched the fourth tally of a 4-0 victory over Loyola Marymount, before capping off the weekend with a two-goal performance in a 3-0 defeat of Maryland on Sunday.

F Rachel Daly, St. John's: Another forward who went on a five goal outburst over the weekend, Daly scored twice in a 4-0 win over Central Connecticut, following that up with a hat trick against Brown. The three goal effort was her second of the season and raises her goal tally to 11 on the year.