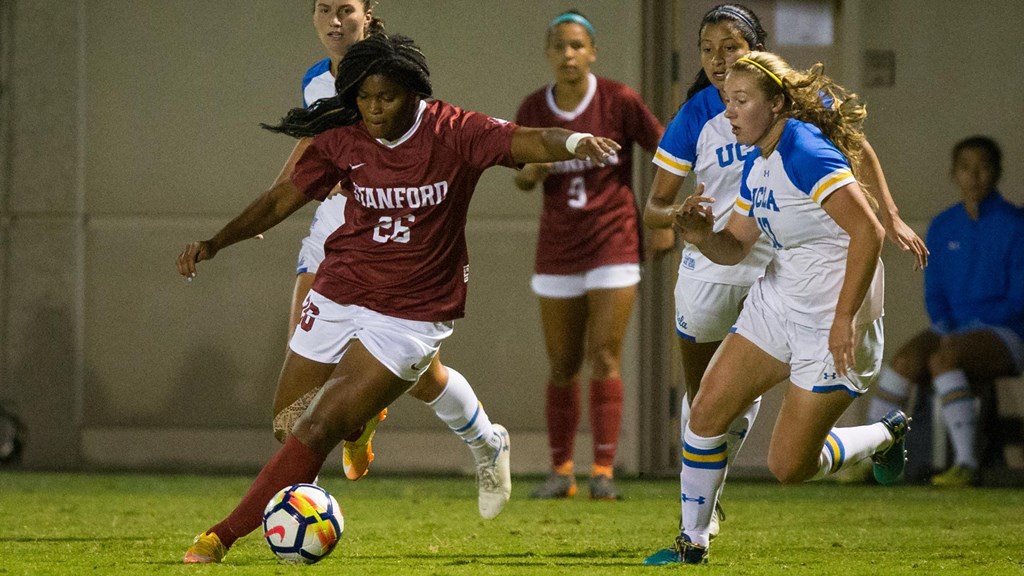 This coming weekend is the final round of games in the women’s Division I college season, as four teams head to Avaya Stadium in San Jose.

MORE: NWSL prospects get one final shot at College Cup

Carolina is back in California, where they last won a national championship way back in 2012. This isn’t their first trip to Avaya Stadium as they were knocked out in the 2016 College Cup by West Virginia. This weekend marks a third trip to the Final Four in the past four seasons for the Tar Heels, which haven’t been able to get snap their championship drought. Could this be the year? It would be foolish to overlook Washington State, and with the news that Emily Fox tore her ACL in the quarterfinals, UNC won’t be quite at full strength. There still is plenty to call upon, whether it’s Taylor Otto or Brianna Pinto to lock things down centrally in the midfield and Alessia Russo attacking up front.

The Cougars are equipped to give the Tar Heels plenty to think about. Athletic from back-to-front and well tested in the Pac-12, Ella Dederick might be the best goalkeeper left in the field. Midfielder Averie Collins, a graduate transfer from Stanford, brings title-winning experience and a dangerous player to boot. A big day from Dederick is going to be crucial, just like Kaylie Collins (USC) or Jalen Tompkins (Colorado) kept their teams in it against the Tar Heels. Washington State’s approach to this game will be fascinating as they look to keep their dream run going one more game.

Key Matchup: Morgan Weaver vs. Maycee Bell. Even with Fox sidelined, Bell and Lotte Wubben-Moy have quality and experience at the back. But in a game that could open up, if Weaver can find space and take the chances that come her way (or setup her teammates) the Cougars could end up pulling off something special. Bell’s role in limiting that against an experienced player could lead to a dominant day for Carolina.

X-Factor: The loss of Fox certainly forces the UNC staff to tweak their usual lineup and adjust in her absence. As noted, the approach is unlikely to change – provide relentless pressure, look to create chances from crosses or set pieces and go deep into their bench. The Cougars aren’t unafraid of shuffling things up on their end, subbing in seven players against South Carolina. That could determine this matchup: whether or not the Cougars can get production from their bench, or at the very least, not let the game get too far away from them.

Since a 1-0 loss at the hands of Stanford on October 19, UCLA hasn’t lost a game. In fact, that loss is the only one in the Bruins’ last 13. It was Maya Doms, the freshman attacking midfielder, that scored that day, as Catarina Macario didn’t score or assist. That happened to be the last game Macario didn’t score or assist in a game, as she’s piled up the points, sitting on 32 goals and 23 assists this campaign. Her form now seems to be even better than at that game, judging by her two lethal finishes in the quarterfinal against BYU. Stanford’s offensive production has been staggering, with 98 goals in the 2019 campaign, and a more or less full-strength squad. In addition to Macario, Madison Haley and Sophia Smith have bagged a combined 25 goals and 21 assists. Naomi Girma, Samantha Hiatt and Kiki Pickett provide stability in the back.

But sitting on the other side in this one is an extremely talented UCLA side, which is plenty dangerous in their own right. Freshman Mia Fishel is in a rich vein of form with four goals in the tournament, while Ashley Sanchez has scored seven goals and added 14 assists this season. Jessie Fleming remains one of college soccer's best players, even if her impact on the game isn’t as obvious as Macario’s. UCLA’s attack has been torrid in the tournament, scoring 19 goals in four games, the second-most behind Stanford. The team-wide approach has worked to this point, and is going to be absolutely necessary as the Bruins look to take their chances in front of goal. Given how well these two teams know each other adds yet another layer of intrigue. It offers the chance for each coach, whether that’s Stanford’s Paul Ratcliffe or Amanda Cromwell at UCLA, to cook up something special from a tactical perspective to give their respective team a win.

Key Matchup: Catarina Macario vs. anyone in a blue jersey. While Stanford showed in their last encounter with UCLA that there are other players on the roster that can do damage, it’s clear that shackling the Brazilian is huge. If Macario’s allotted any time and space, she’s shown in the tournament that she can score from just about anywhere. And that could be the difference in the game. Getting numbers on Macario opens the door for the likes of Haley or Smith to deal the knock out blow, but perhaps that’s a risk UCLA is willing to take.

X-Factor: UCLA’s tactical approach for this one is going to be fascinating. Do they sit in, and look for Sanchez on the counter? Do they go toe-to-toe with Macario, Haley and Smith and try to keep pace? If they go for the former, defending and getting numbers around Macario and the ball are obviously going to be a massive part of UCLA’s chances of pulling off the win. Striking the right balance could determine how close the Bruins can keep the score.