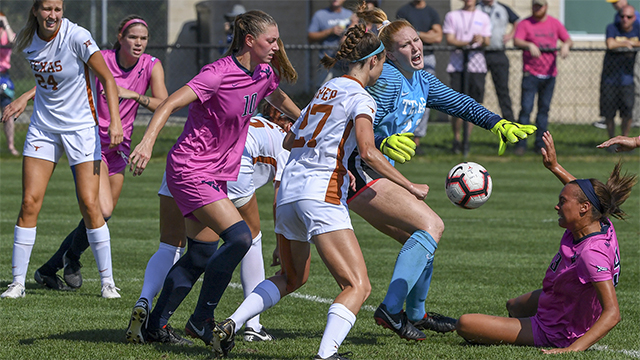 Major conference tournaments continue this week in women’s Division I soccer. Below is a preview of five conferences and their semifinals.

Three teams are eyeing an upset run, as the Hoyas have dominated the regular season heading into the semifinals of the Big East. Georgetown’s only non-win in conference play came last week, drawing 0-0 at Xavier. Caitlin Farrell’s been on a torrid run as a senior, scoring 15 times after netting just 12 times in the three years prior. The Hoyas nearly swept the postseason awards, with Arielle Schechtman and Meaghan Nally joining Farrell as individual honorees. Samantha Dewey, Xavier’s key in the midfield, earned Midfielder of the Year and prevented the sweep. A lot will fall on her efforts to slow down the Hoyas.

Out in Indiana, Butler welcomes Providence for a chance to advance to the conference tournament championship and make a last gasp case for an at-large spot in the NCAA tournament. Both are in the bubble with RPIs in the 40s, though lacking high-profile marquee wins. Butler turns to Paige Monaghan and Anja Savich to look for ways past Providence’s senior defender Katie Day in order to secure progress.

No one’s been able to beat or even draw North Carolina this season, and the Tar Heels roll into Friday’s ACC semifinals as the clear favorite. The team did lose Alessia Russo to an injury last week, leaving the team a bit light in the final third. But defensively, they’ve been so tough to break down with senior right back Julia Ashley and center back Lotte Wubben-Moy playing a significant role in that accomplishment. The Tigers can solidify their NCAA tournament chances with a result, as they sit just on the bubble with an RPI of 46. Three road wins in a row has jolted their tournament chances to life; a win or even a draw here would go a long way.

No. 3 seed Virginia will be out for revenge when it takes the field against Florida State. The Seminoles beat the Cavaliers 2-0 in Charlottesville a bit more than a week ago. Despite holding a 13-4-2 record, FSU feels like it could be a more formidable side and can emphasize that with a win and securing an ACC tournament crown. Getting the most out of Deyna Castellanos is vital to that, while getting the first goal is another critical factor. Two freshmen, Rebecca Jarrett and Alexa Spaanstra, have evolved into two key players in the final third for Virginia, combining for 13 goals. Getting both of those on track against FSU (and beyond) will be a big part in the team’s success for the rest of 2018.

It’s an interesting field out in Westfield, as Grand Park hosts the Big Ten Final Four that features three of the four lower seeds that all won on the road last weekend. The lone high seed is the tournament’s top seed, as regular season champs Penn State survived a close encounter with Michigan in their quarterfinal matchup. Illinois awaits the Nittany Lions in the first match on Friday. The Illini played Penn State very close back in September, losing 2-1 in overtime. It’s been a wild ride this season, with the side showing that they can keep things close, as only three of the team’s seven losses have been by more than a goal (and none by more than two). Senior midfielder Katie Murray’s been a shining spot, scoring eight goals and adding four assists. Penn State’s figured something out, winning eight straight games, conceding just three goals during that stretch.

The other semifinal pits two teams that likely need to win out in order to make the NCAA tournament. Both hold RPIs in the 50s, and whichever side advances to Sunday’s final will have plenty at stake. The two sides didn’t play earlier in the season, so expect a tight game with little ground given. It’s a game that could come down to a matchup between April Bockin, the forward of the year in the conference, and the Nebraska back line that's missing Sinclaire Miramontez, who tore her ACL this season.

It’s anyone’s game at Swope Park with the Big 12 sides returning for this weekend’s semifinals and final. Any of the four teams alive have a good chance at winning. Whether that’s regular season champs Baylor, high-scoring Texas, a battle-tested West Virginia side and a gritty Texas Tech outfit. The Bears bring one of the better defensive records to the quartet, having conceded just 14 goals on the season. Midfielder Julie James is Baylor’s heartbeat and with big performances can lead the Bears to the double. On the other side, the Red Raiders can trouble defenses through Kirsten Davis and Jade King.

The Mountaineers, behind Big 12 Defensive Player of the Year Bianca St. Georges, can also slow down the opposing attack and will need to do so against Cyera Hintzen. Of course, the Longhorns are far from a one-player team. Alexa Adams, Katie Glenn and Haley Berg contribute in that regard, and Texas has also conceded just 14 times on the season. Of all the semifinal matchups this week, this has the potential to be the best one.

SEC (in Orange Beach, Ala.)

Is a late season surge going to propel Florida into the NCAA tournament? After an off year by the program’s standards, the Gators continued rolling on Tuesday, edging Vanderbilt 1-0 in the SEC tournament quarterfinals. With an 7-9-4 record, Florida still needs to win out to hit the .500 mark and extend their postseason. This matchup comes a week after the Gators beat Arkansas 3-0 at home, so it’s a chance for revenge for the Razorbacks. Arkansas should be safe win or lose, so there’s some freedom there. Kayla McKeon and Tori Cannata have led the offense.

Another recent rematch on the other side of the bracket features LSU taking on South Carolina. A late season surge has solidified LSU’s chances of making the tournament, including a 2-1 overtime win against the Gamecocks on October 21. Alex Thomas and Adrienne Richardson have both been a handful in the final third, and they’ll look to give South Carolina stalwart Grace Fisk everything she can handle.