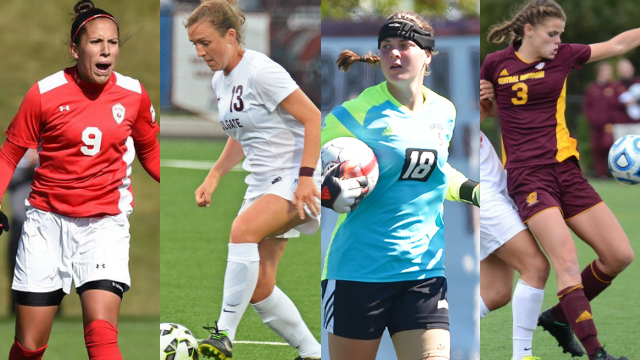 Below is part two of the women's Division I conference preview bonanza.

Read part one here, ahead of this year's women's college soccer campaign.

What happened in 2016: Wisconsin-Milwaukee captured the regular season title by winning eight of its nine conference game. But it was the third seed Northern Kentucky that advanced from the Horizon League to the NCAA Tournament on the back of its conference championship game victory.

2017 outlook: Northern Kentucky’s conference tournament triumph should give them momentum heading into a new campaign. With the reigning Offensive Player of the Year Macy Hamblin leading the charge, the Norse will feel good about challenging for regular season honors. Detroit(w) is another candidate, buoyed by a strong defensive spine of seniors Rachel DeLuca and goalkeeper Marina Manzo. Last year’s regular season champions Wisconsin-Milwaukee will seek to right the wrongs of a year ago and punch a ticket to the tournament. The conference itself looks slightly different, with Valparaiso moving to the Missouri Valley Conference earlier this year, and IUPUI sliding over from the Summit League.

What happened in 2016: Another close race eventually saw Harvard pull away and win the Ivy League regular season title. Margaret Purce’s four-year career in Cambridge ended, though she was picked in the first round of the 2017 NWSL Draft, while Princeton's Tylor Lussi recently joined the Portland Thorns.

2017 outlook: Few conferences in the nation are as wide open as the Ivy League, and this upcoming season should be no different. Brown was the closest challengers to the Crimson last fall, and with Christine Etzel back in goal leading a stingy defense, the Bears should be in the thick of it once again. Princeton is retooling after the departure of Lussi, while Columbia and Penn both have capable coaching staffs of steering a challenge. Cornell, Yale and Dartmouth should all improve as well. Harvard's no slouch either, despite Purce moving on to the next level.

What happened in 2016: It was a double for Monmouth, which cruised into the NCAA Tournament winning the regular season and conference tournaments.

2017 outlook: Monmouth will seek to keep its dominance in the MAAC alive. The Hawks have won five straight regular season titles, and despite the usual amount of turnover, looked primed to continue its success with Rachelle Ross and Madie Gibson among the key returnees. The most likely candidates to put a stop to the New Jersey side include Rider, Quinnipiac, Siena College, Canisius and Marist.

What happened in 2016: Ball State won the Mid-American Conference regular season crown, sitting atop the West Division with a record of 9-1-1. Kent State finished as the No. 2 seed in the conference, finishing in first place in the East Division. They went on to capture the MAC tournament crown after Ball State lost to No. 8 seed Northern Illinois on penalty kicks.

2017 outlook: The loss of Jenna Hellstrom is a big hole for Kent State to fill as they look to continue success in the new season. Both them and Ball State have questions to answer when it comes to replacing extremely valuable seniors. High-scoring Alexis Pelafas will look to replicate her 2016 season at Central Michigan, and take advantage of any chances to compete for a MAC title. Buffalo, Western Michigan and Miami (OH) should also be in the running.

What happened in 2016: After being voted to finish fourth place in the 2016 preseason poll, Illinois State emerged on top in the MVC, winning the regular season and conference title. The Redbirds also knocked out Michigan in the first round of the NCAA tournament, winning on penalties after a 2-2 draw.

2017 outlook: Despite working under a new coach – Brad Silvey took over the program at the end of 2016 – Illinois State is the clear favorite for a new season. Key returnees include Haley Smith in goal, and reigning MVC Freshman of the Year Mikayla Unger. Eight starters are back, making Illinois State a tough team to beat. Drake, Loyola-Chicago, Evansville and Northern Iowa will look to throw them off, while Valparaiso is the wildcard as the new program in the conference.

What happened in 2016: It was a dream regular season for UNLV, which rode the hot hand of Lily Sender to a first place finish. That carried over into the Mountain West conference tournament, where the Rebels edged San Diego State on penalty kicks after an enthralling 3-3 draw.

2017 outlook: Repeating the same run of a year ago will be tricky for the Rebels, which lost Sender to graduation, one of a handful of seniors that was crucial. Defender Chidera Akubuilo is amongst the returnees at UNLV, and her ability at the back will be critical. San Diego State certainly have a chance, as the program generally finds a way to fight near the top of the standings. But the same could be made about San Jose State’s claim, boasting quality in the likes of Dorthe Hoppius and Kristen Amerikwa. Dark horses include Utah State, Wyoming, Fresno State and Boise State.

What happened in 2016: No team in the Northeast Conference finished over .500, as Saint Francis (PA)(w) capture the regular season and conference title. This despite finishing with an overall record of 10-12.

2017 outlook: Senior midfielder Gabi Morales is back for Saint Francis (PA)(w), and her presence will provide plenty of hope for her team to repeat. It’s more than just having Morales back, as the team has 10 of its 11 starters from last year returning. Returning Defender of the Year Jennifer Cafferky will lead Central Connecticut’s charge at thwarting the Red Flash. Also seeking to do the same will be Fairleigh Dickinson and Sacred Heart.

What happened in 2016: Eastern Kentucky and Murray State shared the regular season title in 2016. It was SIUE that earned the conference’s at-large bid by winning the conference tournament. They pulled off one of the most stunning upsets in the first round of the NCAA Tournament, beating Notre Dame on penalty kicks after drawing 0-0 in 110 minutes.

2017 outlook: The race could end up coming down to SIUE and Murray State, though Eastern Kentucky obviously has plenty of momentum. Murray State’s senior standout Harriet Withers is the two-time Offensive Player of the Year, and another big season would certainly favor the Racers. Austin Peay, Southeast Missouri and Tennessee Tech are more than capable of also mounting a challenge for the title.

What happened in 2016: It was the year of the Bison, as Bucknell earned a share of the 2016 regular season title with Boston University, and earned an NCAA Tournament spot by winning the conference tournament. BU, interestingly enough, overcame a 1-10-1 out of conference record to earn a share of the Patriot League crown by going 8-1 in conference.

2017 outlook: Boston University’s been a dominant force since joining the Patriot League, and threw everything at Bucknell before falling in last year’s conference championship in overtime. The two sides should finish near the top of the hear once again given the returning players set to take the field this fall. Similar to other conferences, the Patriot League is generally pretty close, so it would be no shock to see a solid program like Colgate, Lehigh, Navy or Lafayette grow into contention.