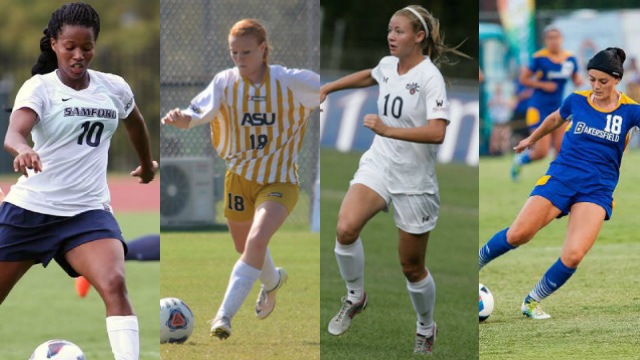 Below is part threeof the women's Division I conference preview bonanza.

Read part one here and part two here ahead of this year's women's college soccer campaign.

What happened in 2016: Samford did the double, winning the regular season and conference tournament, before bowing out to Florida State in the first round of the NCAA Tournament.

2017 outlook: This year’s race is shaping up to be an exciting one. While the reigning champions will obviously enter the 2017 campaign as favorites, there will be challengers from plenty of positions. East Tennessee State has done well mixing a blend of international and domestic talent, and will continue to rely heavily on that for success. Nine of Furman’s 11 starters return, though they’ll have to cope with the losses of two all-time program greats in forward Carlie Couch and goalkeeper Rose Hull. Mercer finished tied for third place with the Paladins, leaving them poised to make a run at the summit of the conference. In the end, it’s hard to see someone slowing down Samford, especially with the dynamic Jermaine Seoposenwe back for her senior season.

What happened in 2016: Central Arkansas finished undefeated during the 2016 conference season, posting a 10-0-1 record. However, they came up short of an NCAA Tournament spot, as Houston Baptist emerged from the conference tournament fray. Stephen F. Austin was the runner up in both the regular season and conference knockout.

2017 outlook: Returning six of its all-conference selections, Central Arkansas enter as the favorites for the regular season crown. Forward Camille Bassett was the linchpin of the team’s offensive production. It should be a close race, however, with Stephen F. Austin, Houston Baptist and Abilene Christian equipped to make a run.

2017 outlook: A two-program race could come down to the wire between Howard and Alabama State, which enter the season in the top two of the preseason coaches’ poll. Targeting a top eight finish is the minimal goal here, as that punches a ticket to the SWAC tournament, a relatively wide open affair.

What happened in 2016: North Dakota State and Denver finished tied on points for the regular season championship. It was South Dakota State that emerged as the conference tournament champions, securing the Summit League automatic bid.

2017 outlook: It should be another close race for the Summit League regular season crown, with any of Denver, South Dakota State, North Dakota State and Oral Roberts certainly in with a shout. All five of the 2016 individual award winners return, so whichever team can mesh its new additions and build momentum towards the late stages of the season will emerge on top of the pile.

What happened in 2016: South Alabama’s dominance in the conference continued, as the Jaguars won all nine Sun Belt games, winning the regular season and conference Titles. They did see head coach Graham Winkworth leave for the head coaching job at Arizona State.

2017 outlook: Richard Moodie is now in charge at South Alabama, coming over from Carson-Newman, a Division II men’s program. Winkworth took Jemma Purfield with him to the Pac-12, but the Jaguars have plenty left to remain a contender. The changeover does leave some uncertainty in the title race, and programs like Coastal Carolina, Appalachian State and Little Rock are among those with the roster and experience to mount a challenge.

What happened in 2016: BYU’s swash-buckling soccer dazzled crowd in the WCC, as Ashley Hatch and Michele Vasconcelos flourished in the final third. The Cougars shared regular season honors with Pepperdine, who were excellent in their own right. They were joined by Santa Clara in the NCAA Tournament, with the latter making it all the way to the quarterfinals.

2017 outlook: It’s shaping up for another exciting WCC race. Between the losses of star power and additions via recruiting classes, the WCC has potential for more than just three programs to challenge at the top. BYU has stud center back Taylor Campbell Isom keeping things on lockdown, while sparkplug Nadia Gomes remains from last year’s attacking side. Goalkeeper Hannah Seabert’s presence will boost Pepperdine, though finding goals will once again dictate the success. After last year’s dream run, Santa Clara’s additions could push them back into the lead. Transfers Maria Sanchez and Kelcie Hedge join the Broncos after spending 2016 on World Cup duty, while freshman Julie Doyle’s another one to watch out for. Loyola Marymount finished just four points from first, and bring back the talent of Sarina Bolden.

What happened in 2016: Another conference double for Seattle, which emerged as regular season champs and won the conference tournament. Their season came to an end against UCLA in the NCAA Tournament.

2017 outlook: Even with the loss of Brie Hooks in the final third, another Seattle sweep wouldn’t be a huge shock to see. Defender Stephanic Spiekerman guides the team at the back, while Natasha Howe will look to provide the heavy-lifting in the attack. A small cluster of teams could end up making a run at Seattle at the top. UMKC could fall in line as a contender, bringing back Kelsey Mothershead and Reighan Childers. Grand Canyon and CSUK Bakersfield continue to make improvements, with Sabrina Delgado expected to have a big season for the latter. Utah Valley will be entering the season with a new coach, as Chris Lemay took over earlier in the year.