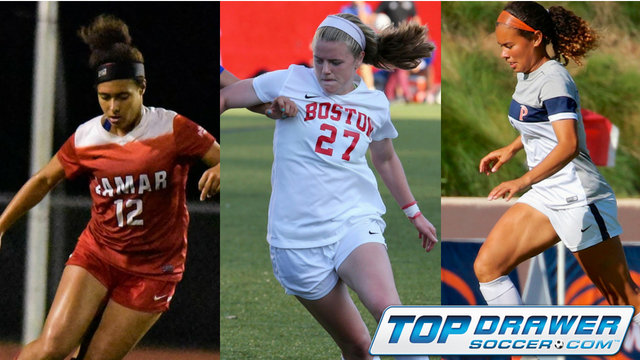 What happened in 2017: Murray State posted an unbeaten record (8-0-2) in OVC play. The No. 1 overall seed held serve in the conference tournament, winning the automatic bid for the NCAA tournament. Tennessee Tech and Eastern Kentucky finished tied for second place, with Belmont rounding out the top four teams.

What to expect in 2018: A new head coach has taken over at Murray State, as longtime assistant Matt Lodge took things over when Jeremy Groves resigned to take an assistant job at Mississippi State. The program’s record was impressive during Groves’ tenure, winning three regular season OVC titles and two tournaments. Preseason polling suggests that the conference coaches don’t think anything will change too significantly, though Murray State did lose star attacker Harriet Withers. Sophomore forward Rebecca Kubin is one of the returners, along with senior goalkeeper Alex Steigerwald. Eastern Kentucky and Tennessee Tech have enough among their returners to hint that they can make a run at the regular season title.

What happened in 2017: At regular season’s end, Navy stood atop the Patriot League, putting together an 8-0-1 record in conference play. That didn’t translate into the conference tournament, as Bucknell emerged victors in a wild championship, defeating Navy 3-2. Perennial contenders Boston University finished third, with Colgate rounding out the top four teams.

What to expect in 2018: It wouldn’t be surprising to see a version of the top four teams: Navy, Boston University, Colgate and Bucknell all in the running towards the top of the table as the season progresses. BU looks poised to snag first place back from Navy, though Lehigh is going to like its chances of at least securing a spot in the conference tournament.

What happened in 2017: Furman and Samford finished tied atop the regular season standings with identical 8-0-1 records. However, neither secured progress to the NCAA tournament, as UNC Greensboro triumphed in the knockout tournament to win the Southern Conference’s at-large bid.

What to expect in 2018: The upcoming season, at least on paper, looks like a three-team chase between Samford, UNC Greensboro and Furman. Obviously, no team can be counted out at this stage of the season. Western Carolina and East Tennessee State might resent being labeled as outsiders. Though if recent history is any indication, the three teams mentioned first look the most likely of competing for both regular season and postseason hardware.

What happened in 2017: Lamar University(w) put together a dominant performance in Southland play, winning the regular season with a 10-1 record. After finishing ahead of Stephen F. Austin, McNeese State and Central Arkansas, Lamar also won the conference tournament to snag the at-large bid.

What to expect in 2018: While Lamar enters as the clear favorite in preseason, playing 11 conference games can lead to a season of unpredictable results. Stephen F. Austin and Abilene Christian are  two of the favorites to give Lamar something to think about, though Central Arkansas, McNeese State and even Houston Baptist have intriguing players that could come together and make some noise.

What happened in 2017: After winning the 2017 regular season title, edging past Grambling State and Howard, Alabama State rode penalty kick wins in the semifinals and final of the SWAC tournament to win the conference’s at-large bid.

What to expect in 2018: Despite losing some key attacking players, Alabama State looks poised as the favorites heading into the new season. Their strength may be more at the back this year, bringing back Mercedes Padilla and Gianna Guyot to keep things tight in front of goal. Preseason Offensive Player of the Year Kaylee Holt is Grambling State’s attacking player to know, and if she’s firing then there’s every reason to believe that she can lead her side towards the top of the table. Howard is the wildcard; having earned the conference’s automatic bid in year’s past, the D.C.-based program could certainly threaten either for regular season or conference tournament honors

What happened in 2017: South Dakota State made it through conference play with a perfect 7-0 record, just edging Denver, Oral Roberts and North Dakota State. All three of those teams sat at 5-2 to make up the Summit League conference tournament field. In the knockout competition, Denver emerged above the rest to punch a ticket to the NCAA tournament.

What to expect in 2018: Another close regular season race seems inevitable. While Denver was voted No. 1 in the preseason poll, there are questions that the Pioneers need to answer when they take the field. South Dakota State seems likeliest to give Denver a run, though a repeat of last year with Oral Roberts and North Dakota State in the running doesn’t seem like a stretch. There’s also a new program in the Summit League, as North Dakota has joined from the Big Sky Conference.

What happened in 2017: South Alabama’s stranglehold over the conference showed no signs of abating, as the four-time Sun Belt Conference regular season and five-time tournament champions claimed both titles last fall.

What to expect in 2018: Can anyone slow down (or stop) USA? Kory Dixon was tabbed the Preseason Offensive Player of the Year and keeping tabs on her could go a long way for a new team to reach the summit. Texas State looks like a prime contender, bringing back Kaylee Davis, Jordan Kondikoff and Genesis Turman to provide the team a formidable spine. Looking outside Texas State, Troy University(w), Coastal Carolina and Arkansas State have the kind of talent and pedigree that could put it all together and throw South Alabama off the top.

What happened in 2017: Thanks to a remarkable defensive record, Pepperdine edged the regular season title, scoring 29 goals in WCC play and conceding just one. They edged out Santa Clara, as both earned spots in the NCAA tournament. Santa Clara enjoyed a tidy run, losing in the third round against South Carolina.

What to expect in 2018: Another two-program race between the Broncos and Waves is not a guarantee, but is the most likely scenario to play out this season. Both teams look like the most talented on paper, though Santa Clara’s rising sophomores Julie Doyle and Kelsey Turnbow have the kind of firepower that could lead the Broncos to first place. The Pepperdine returnees are no slouches however, from defender Hailey Harbison to a sophomore star of its own, Joelle Anderson. Surveying the other sides, it would be a massive shock, though certainly not impossible for BYU or even San Diego to pull off a surprise at the summit.

What happened in 2017: After finishing the conference season with a perfect 7-0 record, UMKC came up short in the conference tournament, as a quality Utah Valley grabbed the automatic bid. Stanford beat UVU 9-1 in the first round of the NCAA Tournament.

What to expect in 2018: Both UMKC and Utah Valley should be there or thereabouts for the regular season crown. The two sides look to continue ruling the roost that Seattle once stood atop; the Pacific Northwest outfit seeks a return to the summit as well. Grand Canyon and UTRGV can’t be counted out after putting together strong runs in 2017. The conference features a new program as well, with California Baptist making the move up from Division II. Two programs also have new coaches with Sebastian Vecchio (CSU Bakersfield) and Rob Baarts (New Mexico State) hired earlier in 2018.