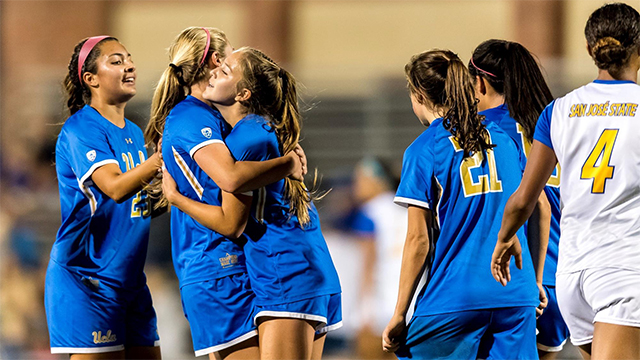 Only four games stand between now and the Division I Women’s College Cup.

Preview all four of this weekend’s matches below.

If the Nittany Lions are to make a return to the College Cup – sight of their 2015 title triumph – they have to swim against history. Florida State’s impressive 43-1-1 mark at home is just one of many reasons, as the Seminoles are built for this stage of the season. After a bruising encounter with USC, this one should be another similarly close matchup, as long as Penn State can keep FSU’s key attackers in check. No one’s really been in scintillating form in front of goals for either side; Yujie Zhao scored and setup another in Friday’s second round win. Penn State’s mustered the close win, beating Wake Forest and South Carolina by 1-0 scores. The spine of the Big Ten champs is going to be difficult to break down, whether it’s Emily Ogle bossing the midfield or Kaleigh Riehl anchoring the back line. Brooke Bollinger’s status here is a big question. The redshirt freshman suffered an injury in the ACC championship, and if she’s not ready to go, pressure is on Caroline Jeffers to come through again.

The latest side that gets a shot at slowing down Stanford is Tennessee. If there’s one player capable of breaking down the Cardinal defense and causing them problems, it’s Bunny Shaw. The oft-mentioned Jamaican forward’s enjoyed a stellar season for college and country, and if she is on song in Palo Alto it could make this interesting. Of course, at the other end of the field the Volunteers have to find a way to bottle up the potent Stanford offense. Whether that’s Catarina Macario or Jordan DiBiasi, the options are ample when it comes to creating issues. Goalkeeper Shae Yanez has shown the ability to stand on her head and if she can deliver a huge performance in this clash it could set the foundation for an upset.

For the second time in a span of three seasons, the Hoyas are a game from the College Cup. They managed to punch their ticket in the 2016 campaign with a home win against Santa Clara and seek a return with Baylor making the trip up from Waco. With 11 wins in 12 games at Shaw Field, Georgetown is tough, organized and nearly impossible to score on. Caitlin Farrell comes through in the clutch time and time, while the addition of Kyra Carusa and her championship experience helps to drive the Hoyas on. All five of Baylor’s losses this year have been away from home, so that’s something worth keeping in mind, even if the team’s willingness to bog down the midfield and look for chances from any angle could work on the Hilltop. Julie James is the team’s heartbeat in midfield, although it’s Camryn Wendlandt who consistently delivers in the clutch with five game winners in 2018. There’s not going to be much separating these two sides on Saturday.

Just one game stands between North Carolina and a shot at a College Cup on what would basically be there home turf. That obstacle standing in its way is the same program that thwarted the Tar Heels from a Cary College Cup in 2013, on the way to UCLA’s lone national title. Despite making the cross-country flight, the Bruins are in formidable form. Winners of 12-straight games, bolstered by Jessie Fleming and Hailie Mace in the starting lineup, UCLA has oodles of offensive firepower to trouble the Tar Heels. Add in Ashley Sanchez, who makes the Bruins deadly from set pieces or the run of play, and there will be much for North Carolina’s defense to think about. While UNC doesn’t have the same kind threats, freshman Rachael Dorwart’s three goals in three tournament games has come in handy. Dorian Bailey is always ready and willing to make lung-bursting runs into the backs, and the team works hard to throttle the opposition. Julia Ashley will have her hands full with Hailie Mace’s run from the left back spot, though it’s shutting down Fleming centrally that could be crucial. If they can keep the Canadian off the ball, it could certainly lead to a Tar Heel victory.